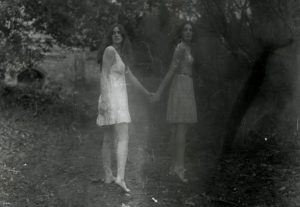 A crisis apparition appears to an individual when their loved one is facing a severe injury, illness or has died. It has been reported to be the most common paranormal phenomena.

The vision may appear close to the time of death or the subject of the vision may still be living. In these cases, the apparition occurs in a time of emotional turmoil or physical danger.

There have been reports of crisis apparition throughout history. In one example, a confirmed denouncer of such visions slowly became a believer.

A classic example would be for someone living on the east coast of the United States suddenly seeing a member of their family who lives in another region of the nation. They are initially startled and may think it was just their imagination. Then they receive a telephone call informing them the person they had just seen has died.

An Explanation for Crisis Apparitions

One theory about crisis apparitions is that the soul of an individual is freed from the physical body at the time of death. The soul is now able to freely travel through space and time.

The person may want to make one last visit to say goodbye or comfort loved ones. This theory defies the laws of physical reality and suggests there is an intangible energy between humans that can survive the death of physical body.

Crisis Apparitions of the Living

There are incidences of crisis apparitions where the person appearing in the vision is alive. At times, a person may hear the voice of their loved one relaying a message or warning. This type of apparition can occur when the subject of the vision is in some sort of physical pain or danger.

There is a theory that the person who is facing danger or a serious illness can project psychic energy to their loved ones. They may not be aware of they are doing this due to the situation they are facing at the specific moment.

This type of crisis apparition is very similar to apparitions of those who have died. As the energy is projected to the recipient, their brain translates this force into an image of the sender. Researchers feel some people are more sensitive to this energy and may have a greater chance of having some sort of paranormal experience.

Reports of crisis apparitions have been reported in many areas of the world and at different points in history.

One case involved John Frederick Oberlin, a pastor, educator and philanthropists who had traveled to the Vosges Mountains in the Alsace region of France to serve the residents of the Bande-la-Roche. Upon his arrival in the early 1800s, Oberlin soon learned the villagers believed in several superstitions including apparitions of dying individuals.

Oberlin found these beliefs to be foolish and was especially dismayed over the reports of villagers seeing apparitions of those about to die. As the village’s new pastor, Oberlin made a decision to educate the residents of Bande-la-Roche and help them overcome their superstitions.

Although Oberlin made a valiant effort to change the villager’s beliefs concerning apparitions, his own opinion would change in 1806. An avalanche had fallen and many of the villagers had been buried under the rubble. There were so many reports of the survivors seeing apparitions of their loved ones killed that Oberlin began to believe in this phenomena.

While crisis apparitions have been reported to be both living and dead individuals, there is a common emotional purpose to their appearance. Those who appear share a bond with those who experience the sightings. It is their way to show love.

Who is an Energy Vampire? Energy Draining People