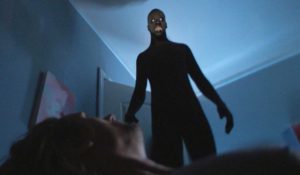 Sleep is considered to be a time of calm and relaxation. Most of us are drifting from our waking lives into repetitive cycles of deep, non-REM sleep, accompanied by dream-filled, fast-eye-movement (REM) sleep.

But when the boundaries of these three phases of excitement become distorted, sleep can be very scary. In fact, some sleep disorders seem more at home in horror films than in your bedroom.

People suffering from this are awoken an hour or two after falling asleep by a loud noise from their mind. Ranging from a gunshot to a scream, researchers still aren’t sure what causes it.

This rare disease that causes sufferers to oversleep for up to 20 hours a day has been linked to appetite. There is no known cure.

While either waking or falling asleep, the sufferer feels completely unable to move. Linked to anxiety disorders, narcolepsy, migraines, and obstructed sleep apnea, they often feel as if someone menacing is hovering over them or physically holding them down.

This extremely rare version of insomnia is fatal, as the name suggests, for those suffering. Death usually occurs within six to 32 months after symptoms arise.

This condition impairs the thalamus in your brain and can also cause hallucinations and loss of motor function. It is hereditary, children of sufferers being 50 percent more likely to develop the disorder.

Sufferers of this disorder feel as if they are in a constant state of jet lag, constantly feeling “out of it.” They are dealing with a longer circadian rhythm which causes a 25 or 26 hour sleep/awake cycle and is common among the blind.

This disorder is caused by an autoimmune destruction of hypocretin-producing neurons in the brain disrupting the regulation of a person’s sleep/awake cycle. As a result, they are prone to falling asleep without warning at any time of day.

Occurring during rapid-eye movement when your dreams are most vivid, this causes the sufferer to unconsciously physically act out what is happening their dreams. This type of parasomnia is thankfully treatable.

This phenomena of literally sleeping yourself to death occurs mostly in young men and is more common in Southeast Asian areas. The cause is unknown, but some believe the victims’ hearts skip a beat and never start back up.

Enough? Then sweet dreams to you today…

Cosmic Ordering: When The Universe Gives You What You Wish