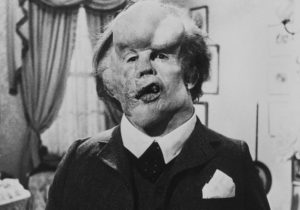 Joseph Carey Merrick, an apparently healthy baby, was born to Mary Jane and Joseph Merrick in Leicester, England on 5 August 1862. His parents attributed their son’s development of lumpy, greyish skin in early childhood to his mother being knocked over by a fairground elephant while she was pregnant.

Despite increasing physical deformities, including the development of a bony lump on his forehead, Joseph had a relatively normal childhood. One of his arms and both of his feet became enlarged and at some point during his childhood he fell and damaged his hip, resulting in permanent lameness. He attended school and had a close relationship with his mother.

In 1873, when Merrick was just 11 years old, his mother died of bronchial pneumonia, he would later describe her passing as the “greatest sadness in my life.”His father remarried less than a year later, and Merrick left school to seek work, eventually finding a job rolling cigars in a factory.

But, less than two years later, his right hand had become so badly deformed that he could no longer do the work and was forced to leave. His father, who owned a haberdashery, attained a peddler’s license for him and sent him out to the streets to sell his shop’s wares.

By this point, however, Merrick’s deformities were so extreme, and his speech so impaired as a result, that people were either frightened of him or unable to understand him, and his efforts were met with little success.

One day, after his father beat him severely for not earning enough money, Merrick went to live with an uncle briefly before becoming a resident at the Leicester Union Workhouse at age 17. Merrick found life in the workhouse intolerable, but unable to find any other means of supporting himself, he was forced to stay.

In 1884, Merrick decided to try to profit from his deformities and escape life in the workhouse. He contacted Sam Torr, the proprietor of a Leicester music hall called the Gaiety Palace of Varieties, and they devised a plan to secure him a spot in a human oddities show.

Merrick was soon exhibited as “The Elephant Man, Half-Man, Half-Elephant” to great success in Leicester and Nottingham before eventually travelling to London that November. He wore a cape and veil to conceal his deformities in public, but was often harassed by mobs as he travelled. In London, the Elephant Man exhibit was housed across the street from the London Hospital and was frequently visited by medical students and doctors interested in Merrick’s condition.

Merrick was eventually invited by a surgeon named Frederick Treves to visit the hospital to be examined. The results of Treves’ examination showed that, by that point, Merrick’s deformities had become extreme. His head measured 36 inches in circumference and his right hand 12 inches at the wrist. His body was covered with tumours, and his legs and hip were so deformed that he had to walk with a cane. He was found to be in otherwise good health.

Treves presented Merrick to the Pathological Society of London in December of that year, and asked Merrick to visit the hospital for further examination. But Merrick refused, later recalling that the experience made him feel like “an animal in a cattle market.”

By 1885, a distaste for freak shows had developed in Britain and Merrick and his managers decided to try to move The Elephant Man exhibit to Belgium. The show met with only mediocre success, however, and Merrick’s manager there eventually robbed him of his life savings and abandoned him.

After finding passage on a ship back to England in June of 1886, Merrick was mobbed by a crowd at Liverpool Street Station in London and taken into custody by the police. Unable to understand Merrick, they eventually found Frederick Treves’ business card on him and took him to the London Hospital. Treves examined Merrick at the hospital and found that his condition had severely deteriorated in the previous two years.

By this time, Merrick was extensively disfigured, with bony protrusions and soft-tissue swellings covering much of his body. He also experienced physical and psychological pain. To avoid the stares and attention of others, he covered himself in a cape and veil whenever he ventured outside.

Distressed by the reaction of others to his body, Merrick often quoted a poem by the hymn writer Isaac Watts: ‘Tis true, my form is something odd, But blaming me is blaming God.’

However, the hospital was considered incapable of caring for “incurables” such as him, and it seemed that Merrick would be forced to fend for himself yet again. When the chairman of the London Hospital, Carr Gromm, was unable to find another hospital to care for Merrick, he decided to publish a letter in the The Times describing Merrick’s case and asking for help.

Gromm’s letter resulted in a sympathetic public outpouring and enough financial donations to provide Merrick with a home for the rest of his life, and in 1887, several rooms in the London Hospital were converted to living quarters for him.

Merrick’s notoriety also resulted in his being aided by members of the British upper class, most notably the actress Madge Kendal and Alexandra the Princess of Wales. (Future accounts of Merrick’s life depict him and Kendal interacting in person and having a deep rapport, though it’s believed that this was probably never the case. The actress’ husband, however, did visit Merrick, while Kendal herself helped raise money for Merrick’s care and sent him several gifts.)

Merrick was able to visit the theatre on at least one occasion, and made trips to the countryside several times over the next few years. When he was at home, he spent his time conversing with Treves (one of the few people who could understand him) or writing prose and poetry. With the help of nursing staff, he also built an elaborate cardboard cathedral, which he sent to Madge Kendal and which would later be exhibited at the hospital.

Despite Merrick’s newfound support structure, his condition however continued to worsen during his time at the London Hospital.

Joseph Merrick died unexpectedly on 11 April 1890, aged 27. Due to the size of his head, he had for his whole life slept sitting up, with his head resting against his knees.The official cause of death was asphyxiation due to his head crushing his windpipe, although Treves, who dissected the body, said that Merrick had died of a dislocated neck.

He believed that Merrick, who had to sleep sitting up because of the weight of his head, had been attempting to sleep lying down, to “be like other people” and surmised that he died from a crushed or severed spinal cord after his head fell back due to positioning on the bed.

Treves arranged for casts to be made of Merrick’s body. He also took skin samples and probably oversaw the bleaching and mounting of his skeleton. Merrick is now thought to have suffered from Proteus syndrome. His life has been the subject of numerous plays, films and books, which focus on his intelligence and sensitivity as a message of tolerance.

Titanic Survivor That Was Branded a Coward