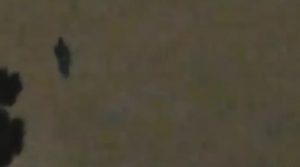 The anomalous object, recorded by Pablo Morales earlier this month on a particularly thunderous day, does not seem to be an aircraft.

Morales, who at the time was with his family, seemed to be so overwhelmed by what he saw that he could even be heard in the video suggesting that the spectacle had divine meaning.

“Is that Jesus Christ ?” Pablo can be heard saying. “Please, oh, Father God.”

After exclaiming to his mother that a man is floating in the sky, she asks if he’s sure and Morales says he’s convinced of it. The oddity eventually floats behind a tree and then apparently begins to descent to the ground.

Meanwhile, skeptics have stated that the object is more likely to be a unique balloon (or maybe a bunch of balloons?) that has escaped its moorings and was blown by the wind through the sky.

But it’s hard to know for sure what it could be without clearer footage.

What do you think it could be?

Malaysia has closed the hospital, where people were intimidated by ghosts