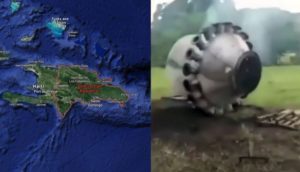 The famous ufologist and virtual archaeologist Scott Waring drew the attention of netizens to a video showing a fragment of an unknown technical device that fell from the sky in the territory of the Dominican Republic.

According to Waring, this mysterious object is still burning, and draws the attention of users to the fire blazing in the hole.

The ufologist is surprised how this thing did not kill anyone when it fell from the sky. The grass around the object provoked a massive fire, which local residents quickly extinguished.

The researcher asks the question, is this technical device created by humans?

If it was created by people, then why is there no official information or warning from NASA or another space agency? If this were one of the stages of SpaceX’s rocket, Waring continues, they would surely warn people living in this region of the Earth. After all, it is very large and dangerous.

The ufologist believes that if none of the countries takes responsibility for what happened, then the object can be considered not even man-made.