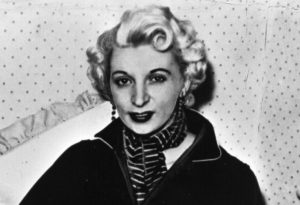 The last woman hanged for murder in Britain was platinum blonde Ruth Ellis, a London bar hostess and call girl from Rhyl in North Wales, who was convicted of the murder of her lover, David Blakely.

Born as Ruth Neilson on the 9 October 1926, in Rhyl, she was the 3rd of 6 children. The family moved to Manchester during her childhood and when she was 14 she left school to work as a waitress.

Shortly afterwards, in 1941 at the height of the Blitz, the Neilsons moved to London. In 1944, 17-year-old Ruth became pregnant by a married Canadian soldier and gave birth to a son, whom she named Clare Andrea Neilson.

Ellis became a nightclub hostess through nude modelling work, which paid significantly more than the various factory and clerical jobs she had held since leaving school.

Early in 1950 she became pregnant by one of her regular customers, having taken up prostitution but she had this pregnancy terminated (illegally) in the third month and returned to work as soon as she could.

On 8 November 1950, she married 41-year-old George Ellis, a divorced dentist, He had been a customer and client of hers. He was a violent alcoholic, jealous and possessive, and the marriage deteriorated rapidly because he was convinced she was having an affair. Ruth left him several times but always returned.

She had a daughter Georgina in 1951 but George refused to acknowledge paternity and they separated shortly afterwards. Ruth and her daughter moved in with her parents and she went back to prostitution to make ends meet.

In 1953, Ruth Ellis decided to become the manager of The Little Club, a nightclub. At this time, she was lavished with expensive gifts by admirers, and it was here that she met David Blakely, three years her junior, through racing driver Mike Hawthorn. Blakely was a well-mannered former public school boy, but also a big drinker.

Within weeks he moved into her flat above the club, despite being engaged to another woman, Mary Dawson. Ellis became pregnant for the fourth time but again aborted the child.

Both Blakely and Ellis had numerous other relationships during their time together and Ruth began seeing Desmond Cussen, moving in with him at 20 Goodward Court, when she was sacked at the Little Club for refusing to end things with Blakely.

Blakely offered to marry Ellis, to which she agreed, but she lost another child in January 1955, after a miscarriage which was brought about by Blakely punching her in the stomach during a furious drunken argument.

Things came to a head on the Easter weekend in April 1955 when Blakely, sick of her, hid with friends and refused to see her or answer her desperate telephone calls. On the Sunday evening Ruth Ellis took a loaded revolver to a pub called the Magdala near Hampstead Heath station, where she thought Blakely would be. 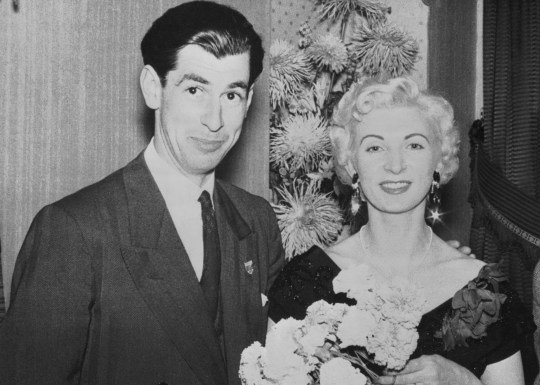 She peeped in to make sure he was there and at around 9:30 pm Blakely and his friend Clive Gunnell emerged. Ellis was waiting on the pavement as the pair passed by her after she stepped out of the doorway of a newsagents next to the Magdala. He ignored her when she said “Hello, David,” then shouted “David!”

As Blakely searched for the keys to his car, Ellis took a .38 calibre Smith & Wesson Victory model revolver from her handbag and fired five shots at Blakely. The first shot missed, and he started to run, pursued by Ellis round the car, where she fired a second shot which caused him to collapse onto the pavement.

She then stood over him and fired three more bullets into him. Ellis then calmly told the bystanders to call the police and surrendered to an off-duty policeman who had been having a drink in the pub.

Blakely was dead when an ambulance got him to hospital. Ruth Ellis eventually told her lawyer privately that Cussen had given her the loaded gun, shown her how to use it and driven her to the pub, but there was no corroboration.

At her trial in June she said nothing of that, refusing to implicate Cussen at all, and failed to mention the regular beatings she had received at the hands of Blakely.

She also declined to plead insanity and maintained she had acted under provocation, even replying to the prosecution question of “When you fired the revolver at close range into the body of David Blakely, what did you intend to do? with the reply of “It’s obvious when I shot him I intended to kill him”.

Her reply in open court guaranteed a guilty verdict and therefore the mandatory death sentence which followed. The jury took just 20 minutes to convict her after the two-day trial and she was sentenced to death.

The execution was set for three weeks later in Holloway Prison at 9am. The case caused a huge national reaction and a petition to the Home Office asking for clemency was signed by 50,000 people, but the Conservative Home Secretary Major Gwilym Lloyd George rejected it, despite the trial judge also asking for clemency.

Ruth Ellis remained calm and dignified, and did not want a petition to reprieve her from the death sentence, and took no part in the campaign, instead spending her time reading the Bible, doing crossword puzzles and writing farewell letters.

She believed she deserved death for killing Blakely and told people: ‘An eye for an eye and a tooth for a tooth. I am quite happy to die.’ Up at 6.30am on that last morning and given a tot of brandy, she was perfectly composed.

A Catholic priest was with her at the end and at her request a crucifix was hung on the wall where she could see it as she steadily walked the few steps from the condemned cell to the execution room next door.

The hangman was Albert Pierrepoint, who denied in his memoirs that any ‘untoward incident’ had marred the proceedings or contributed to his decision to retire just a few months later. He carried out the execution in just 12 seconds and her body was left hanging for an hour.

The execution of Ruth Ellis undoubtedly hastened the subsequent abolition of the death penalty in Britain with novelist Raymond Chandler, then living in Britain, writing a scathing letter to the Evening Standard, referring to what he described as “the medieval savagery of the law”.