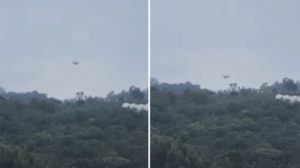 A mysterious video from Colombia seems to show a strange object floating in the sky before eventually landing in the woods.

The odd video was recorded in a remote part of the country known as Valle del Cauca.

Throughout the video, a strangely formed object can be seen hovering in the air over a heavily forested region, as the observer calls his friends to come and see a peculiar phenomenon.

This footage was posted several days ago by Andres Molina, but this sighting happens in late March.

UFO experts claim that the confused witness filmed a flying saucer landing, while critics speculated that the anomaly was either a hawk or some military drone.