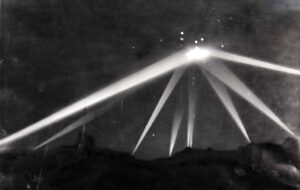 The Battle of Los Angeles, which remains one of the strangest events of WWII and is still a mystery to this day.

The event took place during the night between February 24-25, 1942. Never fully explained, these events remain shrouded in mystery and the subject of intense speculation.

Some facts about the Battle of Los Angeles are not disputed. During the night of the 24th into the 25th, unidentified objects sighted both visually and on radar.

These reports included flares and blinking lights reported around defense plants. Tensions reached a new high when, at 7:18 p.m., authorities called an alert, which was subsequently lifted at 8:23pm.

Early the next morning, radar picked up a target 120 miles west of Los Angeles. At 2:15, antiaircraft batteries were put on alert, and a few minutes later they were given permission to open fire. 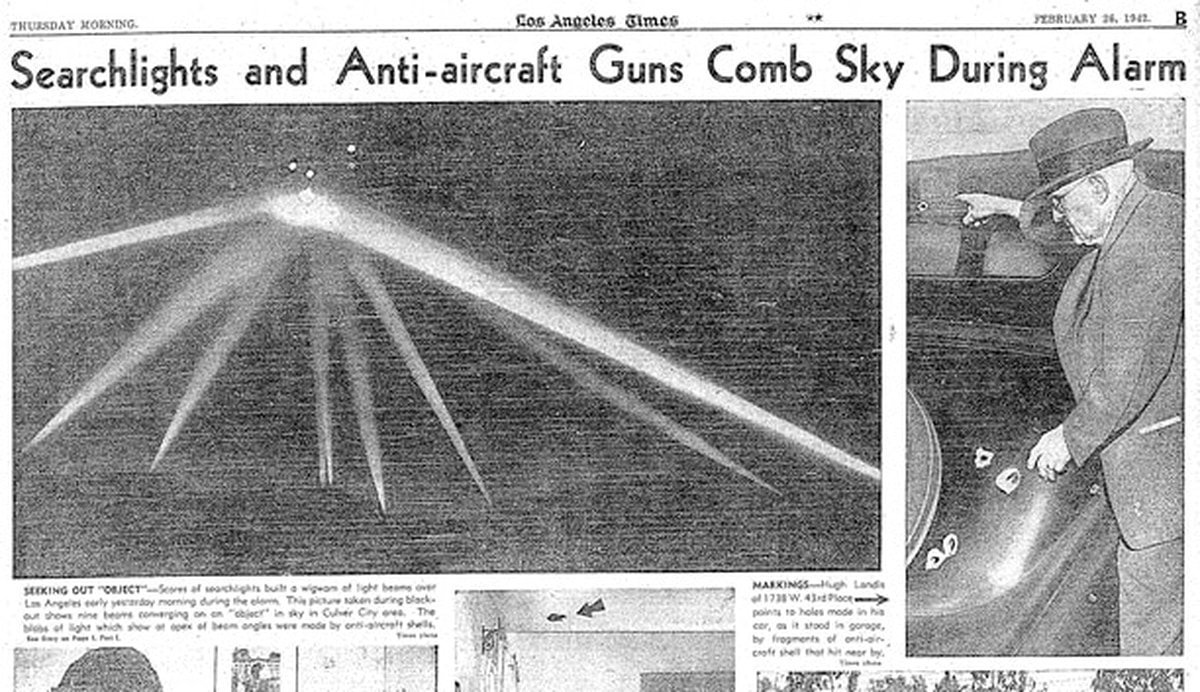 Army Air Force units remained grounded, conserving their small fighter squadrons for when the size of the enemy force was known. Radar tracked the unknown target to a few miles off the cost. At 2:21am, the regional controller ordered a blackout.

From the point that the first shell was fired, the Battle of Los Angeles plunged into confusion and hysteria. For three hours, Los Angeles’ air space was full of phantom planes and exploding shells.

Anti-aircraft crews reported swarms of enemy planes and balloons ranging in altitude from a few thousand feet to upwards of 20,000 feet. They were said to move at speeds upwards of 200 miles per hour in tight formations. Despite the vast numbers, and despite more than 1400 shells being fired in those early morning hours, no wreckage from Japanese planes were discovered once morning broke.

Certainly there were reports–one of the phantom planes supposedly landed in flames at an intersection in Hollywood–but no actual evidence was found by investigators.

The aggressors never dropped any bombs–the only damage to the city came from shell fragments raining down from the anti-aircraft barrage. The only death connected to the incident was an instance of heart failure from all the excitement.

“The obvious thought was that these were Japanese bombers come to attack the United States,” says UFO expert Bill Birnes, publisher of UFO magazine. “But it wasn’t. They were flying too high. And the astounding thing was, not one artillery shell could hit the craft – out of all the hundreds of shells that were fired.

“People outside that night swore that it was neither a plane nor a balloon – it was a UFO. It floated, it glided. And to this day, nobody can explain what that craft was, why our anti-aircraft guns couldn’t hit it – it’s a mystery that’s never been resolved.”

The excitement and confusion of that night made finding an explanation for the incident even more difficult. Likely many of the reported aircraft simply resulted from a combination of excitement, shellbursts illuminated by spotlights, and imagination.

The Navy quickly issued a statement claiming that there was no evidence of enemy planes. The Army remained unsure, but cautiously admitted that the credibility of the reports were shaky at best. The Army Air Force claimed that the planes never existed.

Erring on the side of caution, the Army waited until witnesses were interviewed before releasing a statement. From the various witness testimony, the War Department announced that from one to five unidentified aircraft had been seen over Los Angeles. 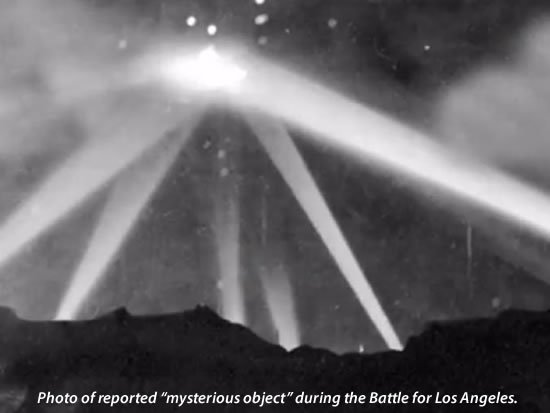 These craft were either commercial planes operated by enemy agents flying from secret fields in Mexico and California, or light planes launched from Japanese submarines. Their speculated objective was to perform reconnaissance on anti-aircraft defenses.

The disagreement between the Army and Navy, and the Army’s tepid explanation for such a dramatic incident, sparked a debate among the public not only about the battle itself but the effectiveness of anti-aircraft defenses.

After all, the argument went, if there were planes in the sky, why were none of them shot down in massive barrage? Why didn’t any Army Air Force planes take off to engage the enemy?

Adding to the mystery of the incident, Japan stated after the war that it did not send planes over Los Angeles at the time of the alert (they did, however, use light submarine-launched aircraft for reconnaissance of Seattle.)

At first, officials offered a very vague explanation. According to the Los Angeles Times (February 26, 1942), the secretary of the Navy, Frank Knox, dismissed the event as a “false alarm” due to “jittery nerves,” but when this failed to satisfy the press and the public, the Army responded with a definitive answer that the craft and the battle were real, and the next day, Secretary of War Henry L. Stimson confirmed that.

Santa Monica’s US Representative, Leland Ford, was quoted in the Times on February 27 calling for a Congressional investigation into the incident, but this went nowhere.

In the years since, various explanations have been offered – from Japanese planes to German craft launched from secret bases in Mexico to unidentified aircraft to weather balloons to sky lanterns to blimps.

However, it is also alleged that General Marshall reported that the Army had recovered an unidentified aircraft off the coast of California that indicated that the “mystery airplanes are in fact not earthly and according to secret intelligence sources they are in all probability of interplanetary origin.”