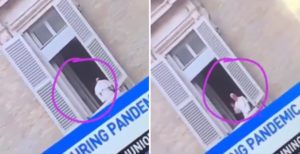 On April 13th, a very strange video spread in the social networks of Italy, and then around the world, which depicts the speech of the Pope.

As you can see in the footage, during the official broadcast of Pope Francis’ speech, he went out on the balcony, greeted, turned around, walked slowly and disappeared. Literally.

Special technologies for creating holograms have been around for quite some time. If so, why did the Vatican begin to show tricks to viewers directly during the live broadcast?

In this situation, several versions were put forward at once. The most logical assumption is that he would have serious greeting problems and even that he would be dead.

If so, why does the Vatican hide it? Another question, can we trust the Vatican after what we see?

Now we can only guess what is really happening in the Vatican and what it actually was on the video.