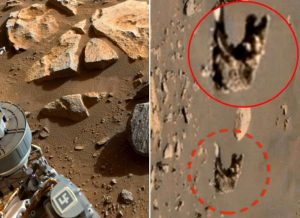 As quickly as NASA publishes unbelievably detailed photographs of the Martian surface, people back home find odd and unusual objects within those photos.

Of course, NASA always discounts the newfound anomalous objects as “natural rock formations”. Matters were clouded in early 2014 when observant researchers found “before and after” photos proving that NASA occasionally “cleans up” some of their photos (and videos).

NASA calmly explained that in some instances, camera imperfections must be corrected using software – like Photoshop.

Still, despite NASA’s proven manipulation of the Mars photographs, eagle-eyed researchers continue finding unusual anomalies in the photographs of the Martian surface and ask “Have you *ever* in your life seen a natural rock formation on Earth that looks like that?”

Here are a collection of some of the unusual sights found on Mars to date.

Resembling a fossilized femur bone, this odd object was explained by NASA as a “shiny-looking rock” that had been sculpted by erosion (either wind or water). 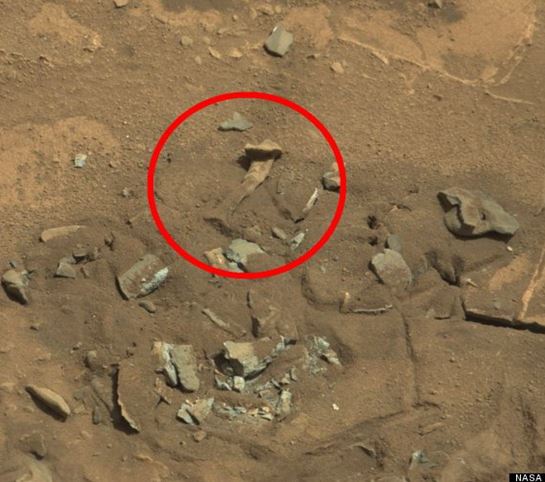 Others however pointed out the impossibility of wind and erosion shaping a rock in such a bizarre manner. The Thigh Bone was found on the Red Planet in August 2014.

The Rodent or Mars Rat

Looking like a mouse or squirrel laying on its stomach, the Mars Rat was captured (on film) by NASA’s Mars rover Curiosity in September 2012 and generated a lot of Internet interest after viewers noted the features – eyes, nose, ears, cheeks, legs – of the cute little creature were easily discernible. 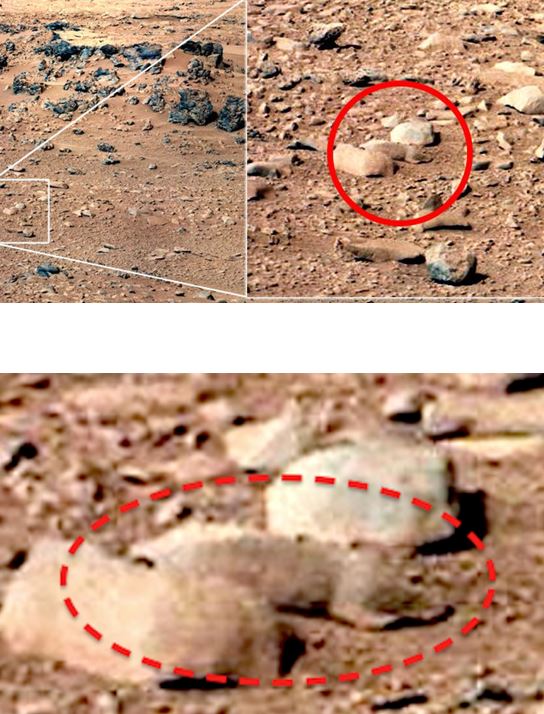 This one’s a bit tougher to explain as a rock as the features are very clear and include a long, thin tail which seemingly would be an impossible shape to be formed by natural erosion. 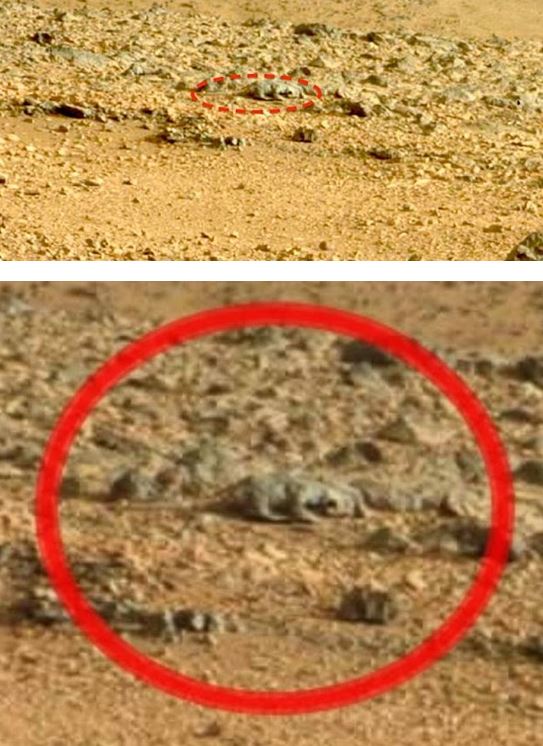 The object was reportedly discovered by a Japanese researcher in March 2013 and appears to show a tail, four legs, and other obvious characteristics of a lizard.

Photographed by the NASA rover Spirit, this frozen woman perched on a rock had many wondering if the rain of fire over Sodom and Gomorrah took place on Mars instead. 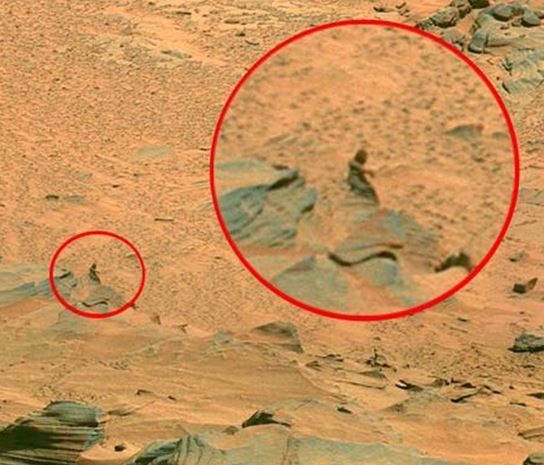 The photo looks remarkably like a female figure with an outstretched arm. The image was sent back to Earth by the Mars Spirit rover in 2008.

The Iguana was discovered by an eagle-eyed enthusiast on November 6, 2013 in photos taken by the Mars Curiosity rover. 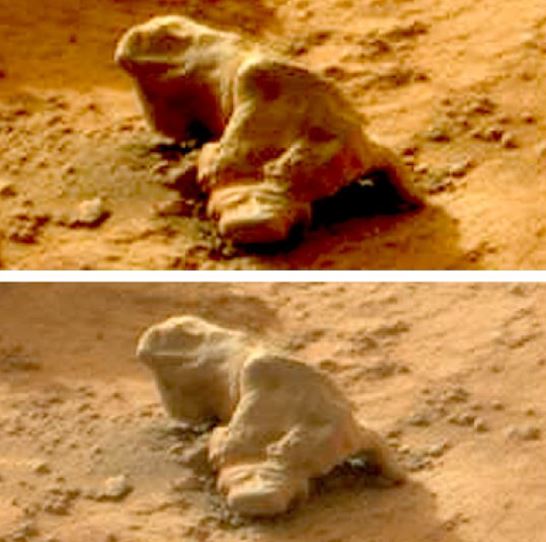 NASA was informed of the finding but refused to turn the rover back to investigate further. At the time, some began to wonder if NASA were purposefully planting life on the Red Planet.

Shaped like a perfect sphere, the Ball was discovered late in 2014 by the Curiosity rover on sol 746 atop a rocky outcrop. 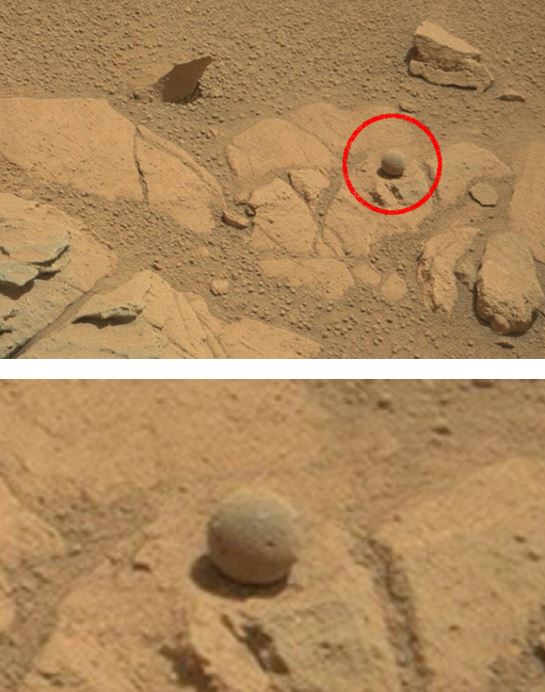 The perfectly round object sits atop a flat rock and looks like a dirty cannonball. NASA explained it as “concretion”.

The Jelly Donut wasn’t known as much for its unusual appearance as the fact that it appeared on Mars during a 12-day period when Opportunity wasn’t looking. 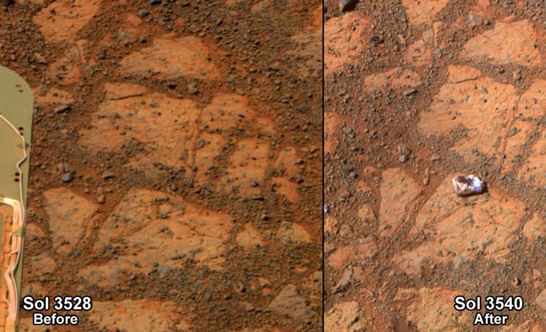 The unusual object simply materialized out of thin air right in front of Opportunity.

Several instances of skulls, both human and animal, have reportedly been found on the Martian surface. Below are a few notable instances. 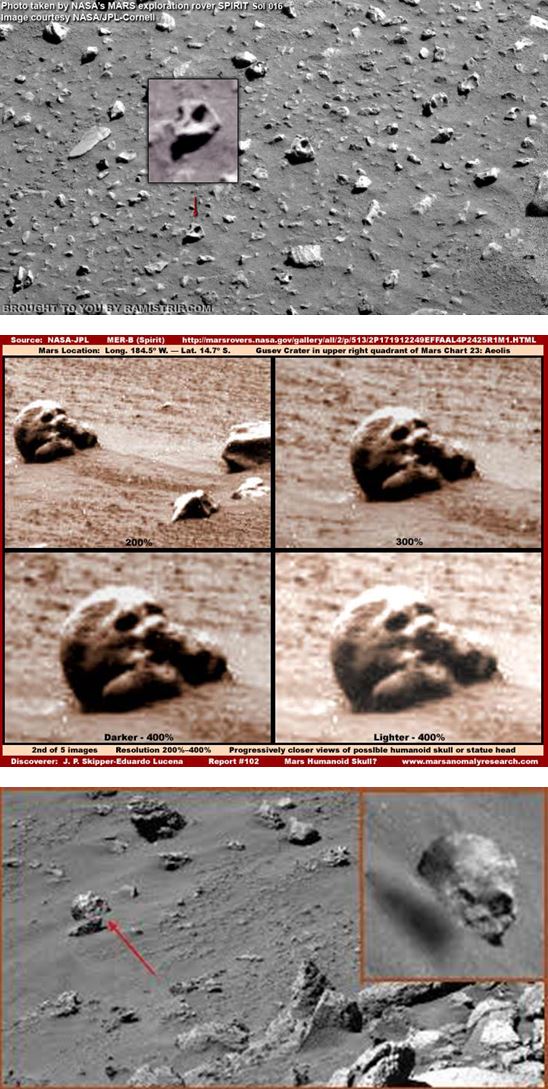 The “Coffin” was found in a December 2014 NASA photo taken by the Mars Rover and clearly shows a linear, rectangular-shape object that certainly resembled a manmade coffin or box of some sort. 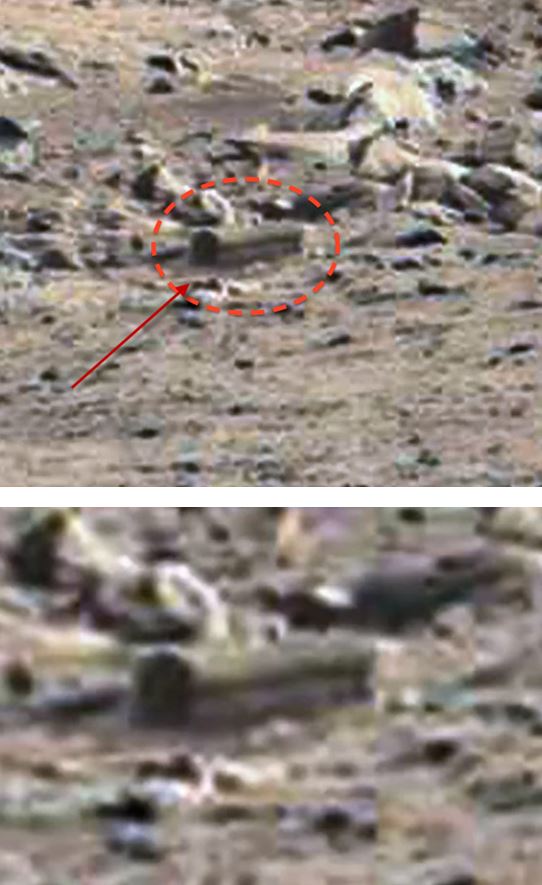 Could Life Have Evolved on Mars Before Earth?

The discovery that ancient Mars could have supported microbes raises the tantalizing possibility that life may have evolved on the Red Planet before it took root on Earth.

New observations by NASA’s Curiosity rover suggest that microbial life could have survived on Mars in the distant past, when the Red Planet was a warmer and wetter place.

It’s unclear exactly how long ago Mars’ habitability window opened up, researchers said. But the timing may be comparable to that of Earth, where life first appeared around 3.8 billion years ago.

Stargates: Real Doorways Of The Universe

How Likely Are You To Be Killed By Falling Space Junk?