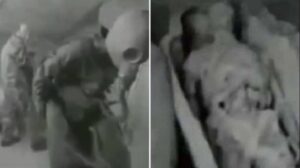 In 1961, the KGB launched Project ISIS, a top-secret program designed to obtain alien technology. It culminated with the discovery of a 13,000 year-old alien body inside a tomb in the Giza Plateau in Egypt.

In the early years of the Cold War, Russian military officials feared the United States had gained a tactical advantage through reverse-engineering alien technology, presumably by studying UFOs such as the one that crashed near Roswell.

Determined to possess advanced technology themselves, the Russians used their intelligence services to locate several places where extraterrestrial artifacts might be found. 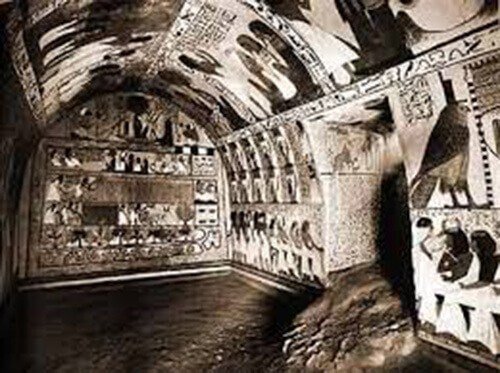 One of these places was an ancient tomb located in the Giza Plateau in Egypt. They based their search on an old legend about the Tomb of the Visitor God.

As the story goes, two Bedouins accidentally stumbled upon the ancient resting place of an alien visitor. Immediately after entering the tomb, the two men fell ill and were hospitalized. Before they succumbed to the mysterious illness, they were able to give details about the tomb’s whereabouts.

The Egyptian authorities traded this information with their Russian allies, who wanted to reach the Tomb of the Visitor God before the CIA found out about it. As a result, they quickly organized a Project ISIS expedition.

A group of Soviet Egyptologists, scientists and military personnel were assisted by their Egyptian counterparts in locating the tomb. This information is verified by Russian scientist Viktor Ivanvich, who had access to classified KGB documents:

“There is no doubt that a small group of Russian scientists with military experts have discovered a tomb in Egypt in 1961. But in the documents, it has never been revealed exactly what was found inside the sarcophagus.

“Only sources of the highest ranks of the KGB know that we have found the remains of an alien creature that died in Egypt 10,000 before Christ.”

The Russian-Egyptian expedition managed to uncover the tomb and reportedly secured numerous artifacts. According to a report to a senior officer of the KGB, 15 boxes of artifacts were taken from the Tomb of the Visitor God.

Hieroglyphic inscriptions were copied and translated. Among the inscriptions was a prophecy foretelling about the return of a winged alien god. The report also mentions the presence of a protective barrier:

“During the inspection of the walls we noticed a strange repulsive force coming out of the walls. We could not find any scientific explanation.” 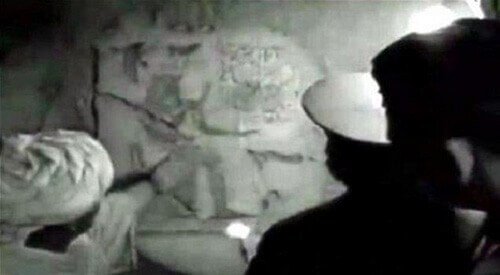 But nothing found inside the tomb was as puzzling as the mummified body of the Visitor God himself, carefully placed inside a large sarcophagus. The body was larger than that of the average Egyptian and Carbon-14 tests revealed it was approximately 13,000 years old.

According to Egyptian mythology, the first dynasty was established by the god-man Osiris, who descended on Earth in a flying boat.’ Is this a reference to a UFO and if so, did Project ISIS really find this civilizing alien god’s mummified body? 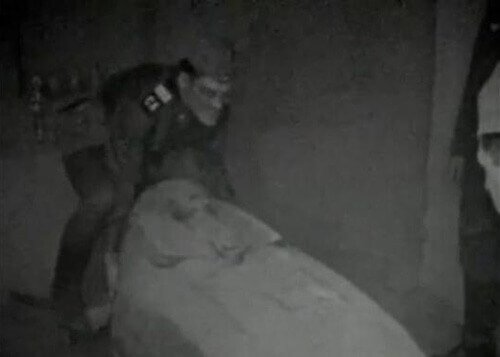 It’s impossible to tell but video evidence of the discovery exists. A black and white video presents details of the archaeological dig and was allegedly obtained through a Russian intermediary with access to the secret KGB archives.

The video shows Soviet personnel entering the tomb without protective gear and two soldiers lifting the lid off the sarcophagus. A cloud of toxic smoke is seen rising and determines the men to return wearing protective suits and gas masks.

The Project ISIS mission team included Egyptologists of the Soviet Academy of Sciences, scientists, and military experts. The team was supported by Sami Sharaf, a close aide of President Gamel Abdel Nasser of Egypt.

The collaboration between Egypt and Russia is understood when we consider the geopolitical situation at the time. The Soviets supported Egypt against Israel, France, and Britain and the jointly organized Project ISIS was ostensibly the outcome of shared security and defense interests.

While it’s not possible to certify that the mummified body really belonged to an alien god, forensic analysts declared the video genuine. To this day, the outcome of the expedition is unknown.

Seven Secret Societies That Are Probably Controlling Your Life