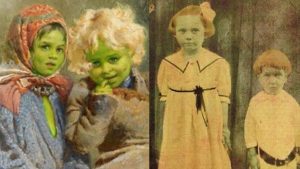 The story of the green children of Woolpit is one of the most peculiar paranormal legends to come out of the Middle Ages. Although the story reads like somewhat of a mythical English fairy tale, there are quite a few historical sources that treat the incident as factual.

In 12th century England, during the tumultuous reign of King Stephen, a small Suffolk village known as Woolpit (so named for the various deep ditches in the town that served as wolf traps, or “wolf pits”) received quite a stir when two small children suddenly and mysteriously appeared in a field where a group of farmers were working.

The children, presumably a brother and sister, had skin that displayed a greenish hue, and their garments were of an unfamiliar origin. They appeared to be bewildered, as if they had been lost, so the reapers eventually took them into the village and put them into the care of a local landowner named Sir Richard de Calne.

The children refused to eat any food for several days, often in tears, but eventually they acquiesced to trying a small portion of newly harvested beans. The children soon developed a voracious appetite for raw beans, eating them almost exclusively for several months until they eventually acquired a taste for other basic foods such as bread.

As more time passed, they began eating a larger variety of foods, and their skin eventually lost its green color. Both siblings began to adjust to “normal” life and were even baptized by the local clergy, but the boy (who appeared to be the younger sibling) became depressed and fell ill, and died shortly thereafter.

The girl continued to thrive, growing into a healthy and normal-looking young woman. She learned to speak fluent English, and according to some sources, she later married Richard Barre, a prominent chancellor under King Henry II.

Other sources claim that the present Earl Ferrers has ancestral ties to Agnes Barre through some type of intermarriage, but it is unclear whether or not this can be substantiated by any factual historical records. 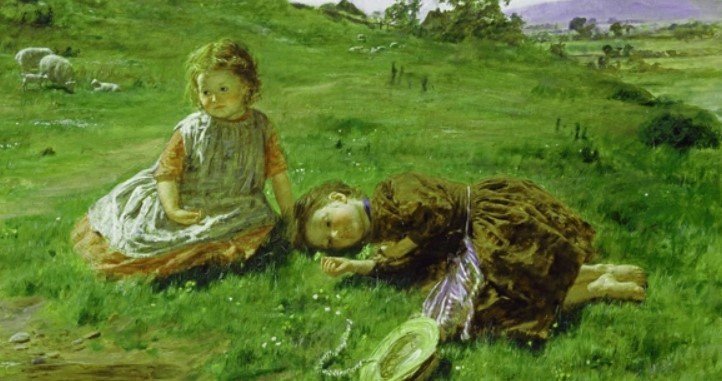 When later interviewed about her childhood experience, the girl was not able to recall many specific details about her past, or how she and her brother actually arrived at the fields of Woolpit.

She did state that she and her brother were from a place known as “St. Martin’s Land”, where sunlight was extremely rare, and all of the inhabitants had the same greenish skin color as the two young siblings.

She alluded to the notion that her mysterious homeland may be accessible by caverns that go deep into the earth, recounting a story in which she and her brother were tending their father’s cattle and followed the animals into a large opening.

The siblings became lost inside the cavern, wandering around in the dark until they eventually reached the mouth of the cave. Upon exiting the cavern, the sunlight was so bright and intense that the siblings were dazed and disoriented, unable to find the opening of the cave again before the farmers located them.

In medieval England, it was quite common for various folklore and myths to circulate among the people, but it was relatively rare for a legend to be documented as an actual occurrence by two well-known historians.

This was the case with the story of the green children of Woolpit; two chroniclers named Ralph of Coggeshall and William of Newburgh made mention of the bizarre incident in their writings.

Ralph was a Cistercian monk and the sixth abbot of Coggeshall, a small town in Essex. William was an Augustinian canon and one of the most well-respected chroniclers of The Anarchy, a war that occurred under King Stephen’s rule.

Ralph documents the incident in his historical work known as the Chronicon Anglicanum, relaying first-hand information from Sir Richard de Calne, the man who initially gave the children refuge when they were first discovered. In fact, according to de Calne, “Agnes” reportedly worked as a servant at his estate for many years after she grew older.

Ralph would have definitely had the ability to directly interview many of the witnesses of the event, because he lived in Essex, the county right next to Suffolk. William offers his account in his well-known work entitled Historia Rerum Anglicarum (circa 1189), stating that he obtained his information from several “trustworthy sources.”

Although William may not have had the direct access to witnesses that Ralph was afforded, he stated in his writings that he was “overwhelmed” by the veracity of the testimonies offered by numerous “competent witnesses.” The accounts offered by both authors differ in only a handful of minor details.

Was it an Alien Encounter?

Some researchers have suggested that the two children may have been of extraterrestrial origin, or inhabitants of an underworld that exists beneath the surface of the earth.

This viewpoint is an extension of a well-known hypothesis known as the “Hollow Earth theory”, which states that extraterrestrials have been living in subterranean regions inside of Planet Earth that are only accessible by an elaborate system of caverns.

Scottish astronomer Duncan Lunan has theorized that the two children may have been accidentally teleported from their home planet to Woolpit as the result of a malfunction in the teleportation process.

He also claimed that their green pallor may have originated from an imbalanced diet of genetically modified plants grown on their home planet.

The Legacy of the Legend

Although there are only a relative handful of historical reports regarding this strange event, it has become an exceptionally popular phenomenon, spawning several literary and artistic works. Below are some examples of the far-reaching influence this incident has created:

– English poet Herbert Read detailed the event in his 1934 novel The Green Child.

– Another English poet named Glyn Maxwell adapted the story to create Woolpit, a verse play based on the incident.

– Author John Macklin used the story of the green children as inspiration for his 1965 novel entitled Strange Destinies.

– The village of Woolpit erected a sign in 1977 that commemorates the story, depicting the silhouette of a young boy and girl holding hands.

Although the details surrounding the incident may be somewhat speculative, there is no doubt that this unique piece of medieval history continues to fascinate paranormal enthusiasts around the world.

Until more historical records can be unearthed, or until more clarity regarding the origins or lineage of “Agnes Barre” can be discovered, the intriguing story of the green children of Woolpit will remain one of the most enigmatic legends in English history.