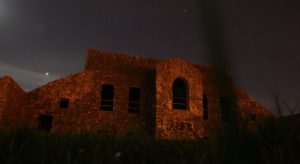 The Hellfire Club was a name for several exclusive clubs for high society rakes established in Britain and Ireland in the 18th century, and was more formally or cautiously known as the Order of the Friars of St. Francis of Wycombe. These clubs were rumoured to be the meeting places of “persons of quality” who wished to take part in immoral acts, and the members were often very involved in politics.

Neither the activities nor membership of the club are easy to ascertain. The club motto was Fais ce que tu voudras (Do what thou wilt), a philosophy of life associated with François Rabelais’ fictional abbey at Thélème and later used by Aleister Crowley.

Throughout history, secret societies have captured the public’s attention. They have been the basis for many conspiracy theories mainly based on their tight secrecy. The question still remains today if they really were secret societies set to overtake the world or if they were just bored people who wanted to give the world something to talk about. One of those secret societies was the Hell Fire Club in England.

The purpose of this club was to enliven the “dull traditional Sunday” with drinks and rude songs. According to a contemporary satire “Religion is their scorn, foul vice their Pride, The Clergy is their Subject to deride”. It is generally assumed that during these rakes’ meeting parodies of religious rites were carried out, though these were probably more akin to Blackadder’s and Melchett’s drinking nights than to the generally imagined Satanic ritual.

The Hell Fire Club was established in the early 1700s by Sir Francis Dashwood. It began as a mockery of religion but became something much more. Dashwood was always at odds with religion and was not quiet about his feelings in that regard. He took many opportunities to mock religion, especially Catholicism. This included the establishment of The Friars of St. Francis of Weycomb (some called it Medmenham which was the name of the abbey the group made its home in) as the Hell Fire Club was originally known as.

According to Daniel Pratt Mannix, “The original Hell-Fire Club had been abolished by special order of the Lord High Chancellor, because even in that broadminded time the members had carried things a little too far when they celebrated Mass on the body of a naked girl stretched out on one of the barroom tables.” Dashwood recreated the group under the new name but the public kept calling the group The Hell Fire Club.

The Hell-Fire Club was sort of a cross between the Dead Poets Society and a risque Playboy club. John Montagu (Lord Sandwich) was a principal, and apparently Lady Mary Wortley Montagu attended. Although Benjamin Franklin (Agent for a number of American colonies) was a member (although there is no written proof), I have no idea if Edward Montague (the Virginia Agent and a colleague of Franklin’s) was involved.

One of the members of the club kidnapped a pedestrian and placed them in a barrel that they subsequently sunk in a lake all because of a bet. Rumors abounded of the fixation the group had with death and even the involvement in strange and unexplained deaths.

Who were these men of power? Obviously, there was Sir Francis Dashwood. In addition to him, there was the Marquis of Granby, the Earl of Bute, John Wilkes, Thomas Potter who was the Archbishop of Canterbury’s son, the Earl of Sandwich (yes, that is where we get the sandwiches we have for lunch), and the Prince of Wales. Rumor has it that even Benjamin Franklin was a member of the society, but this has never been confirmed though he publically associated with many of the members of the club and was known for his “extra-curricular” activities with the ladies. Even the mother-in-law of the Earl of Bute, Lady Mary Wortley, was known for her participation as a “nun”.

Knowing that these people and others were involved in such scandalous activity is enough to make us gasp, but how could this secret society be any more dangerous than spreading disease? Think about who made up the top level of the club. The Prince of Wales along with other members of nobility and even the church were involved. This meant that the power of England met regularly at the abbey. Was it just physical pleasure being exchanged? Or did they also discuss political and economical topics of the day?

Putting this number of powerful men and women together consistently would inevitably lead to power being harnessed at the abbey. Thus, the awe of such a secret society that not only was for personal pleasure but also for personal power gains. Who wouldn’t want to be part of such a group if their desire was for power? The fact that the Prince of Wales who would later become the king the colonies revolted under makes one think of the power that emanated and grew from the debauched abbey.

Eventually, Dashwood’s group was disbanded and the noble gentlemen moved up the ladder in the Freemasons and in government. Yet, many have said that the group was carried secretly to America where it still functions today in complete secrecy with the desire to control the world and have their cake of pleasure, too.

Does the Hell Fire Club still exist today? Do they control many of the countries around the world? Or are they in it only for the fun? This is what makes secret societies so enticing to the world. They are secret for a reason.

Sir Francis’s club was never originally known as a Hellfire Club; it was given this name much later. His club in fact used a number of other names, such as the Brotherhood of St. Francis of Wycombe, Order of Knights of West Wycombe, The Order of the Friars of St Francis of Wycombe and later, after moving their meetings to Medmenham Abbey, they became the Monks or Friars of Medmenham.

The first meeting at Sir Francis’s family home in West Wycombe was held on Walpurgis Night, 1752; a much larger meeting, it was something of a failure and no large-scale meetings were held there again. In 1751, Dashwood leased Medmenham Abbey on the Thames from a friend, Francis Duffield. On moving into the Abbey, Dashwood had numerous expensive works done on the building. It was rebuilt by the architect Nicholas Revett in the style of the 18th century Gothic revival.

At this time, the motto Fait ce que voudras was placed above a doorway in stained glass. It is thought that William Hogarth may have executed murals for this building; none, however, survive. Underneath the Abbey, Dashwood had a series of caves carved out from an existing one. It was decorated again with mythological themes, phallic symbols and other items of a sexual nature.

According to Horace Walpole, the members’ “practice was rigorously pagan: Bacchus and Venus were the deities to whom they almost publicly sacrificed; and the nymphs and the hogsheads that were laid in against the festivals of this new church, sufficiently informed the neighborhood of the complexion of those hermits.” Dashwood’s garden at West Wycombe contained numerous statues and shrines to different gods; Daphne and Flora, Priapus and the previously mentioned Venus and Dionysus.

Meetings occurred twice a month, with an AGM lasting a week or more in June or September. The members addressed each other as “Brothers” and the leader, which changed regularly, as “Abbot”. During meetings members supposedly wore ritual clothing: white trousers, jacket and cap, while the “Abbot” wore a red ensemble of the same style.[35] Like Wharton’s Club, rumours of Black Masses, orgies and Satan or demon worship were well circulated during the time the Club was around. Other clubs, especially in Ireland and Scotland, were rumoured to take part in far more dubious activities. Rumours saw female “guests” (a euphemism for prostitutes) referred to as “Nuns”. Dashwood’s Club meetings often included mock rituals, items of a pornographic nature, much drinking, wenching and banqueting.

There has been much speculation about the layout and the design of the Hellfire Caves. This has been complicated by the fact that the names of the chambers have been changed at least several times. For example, the alcove nearest to the entrance has been called, the tool store, the steward’s cave and the Intersect of Ra. Paul Whitehead’s Cave was once known as the Robing Room (circa 1958). The Miner’s cave was once called the Buttery and the area of caves and pillars near what is called Franklin’s Cave was once just called the Catacombs.

The Sexuality of the Hellfire Caves

Map of the Hellfire Caves with female reproductive system showing the perfect match of the Ovary, Womb, Pubis, Shaft and Testicles. Just a coincidence?

We also suspect that the caves are not quite as they were when Sir Francis used them. It is often suggested that the only surviving record of the caves is from Mrs. Libbe-Powys. However, although her diaries record that she visited the Dashwood Mausoleum and the Church of St. Lawrence, there is no record (that we can find) that she actually entered the caves. Most of the early information about the caves is from Chambers’ Book of Days – a miscellany of popular antiquities written over several years and published by Robert Chambers in 1832 where the only feature of the caves that is positively identified is the River Styx.

According to local legend the caves were originally a prehistoric flint mine that followed a natural fissure. One record suggests that the miners merely followed the subterranean crack and the design of the caves is purely accidental. If this is the case then it is even more unbelievable than the alternative.

The significance of the design was first published by the late Daniel Mannix in his excitable book; “The Hellfire Club. He suggests that the Banqueting Hall is symbolic of a womb and that the “friars” had to pass from the womb through the Triangle (vagina), a process of rebirth, and then be baptised in the river Styx before being eligible to enjoy the pleasures of the Inner temple. (Maybe!)

The entry from a popular internet encyclopaedia states that this theory is strongly refuted by the current Dashwood family although the official website of the Caves states: “The maze may represent something mythical or even part of the human anatomy.” There are several fragmented references to female fertility carvings that once existed in the Catacombs but that have been worn away.

A common claim is that wild orgies went on inside the Inner Sanctum or that each monk had his own private room to entertain “visitors”. However first-hand witnesses say otherwise. Horace Walpole, who dined at least once at Medmenham as a guest, said “each has his cell, in which is indeed little more than a bed” and that near the chapel there were a few cells filled “…with cots where the brothers take their women” (whatever Walpole meant by cot, at the time used to indicate a either a camp bed or a navy hammock, is not clear), while John Wilkes, a confirmed member, brushed away rumours of sinister activities by stating “No profane eye dared to penetrate the English Eleusinian Mysteries of the Chapter Room where the Monks assembled on solemn occasions […] secret rites performed and libations to the Bona Dea”.