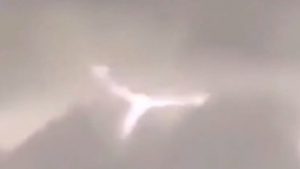 On August 12, 2019, the Disclose Screen “The Grimreefar” Youtube channel uploaded a very unusual video shot in the sky over Brazil in late July.

Usually, when such videos appear, they are shot at night and, as a result, critics begin to prove in every possible way that this is all a “laser show”. However, now everything is filmed in the afternoon and no laser will give such brightness in the daylight.

The movement of the clouds is also not suitable as an explanation, since the light spot moves very quickly, retains its shape, and, most strange – this shape is very similar to an angel.

The strange object remains in motion for a period of time, moving from one cloud to another, changing angle and direction.

The nature of the phenomenon remains unclear. Several conjoined ball lightning spheres, however unlikely, could be one possible explanation.