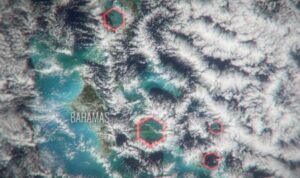 Researchers used satellite imagery to find the answer to one of the most popular mysteries. Now they believe that they managed to reveal the secret and understand how not only ships, but also planes disappear in the Bermuda Triangle, reports Big Think.

In a mysterious region in the North Atlantic Ocean, a huge number of planes and ships have disappeared and crashed.

For a long time, scientists have tried to unravel the mystery and put forward a variety of hypotheses regarding the causes of what is happening. Some time ago, meteorologists proposed another hypothesis, which seems to many to be the most plausible.

Certain hexagonal clouds can cause numerous crashes in the Bermuda Triangle. They differ from other clouds in that they are capable of creating streams where the wind speed reaches 170 miles per hour.

Such dangerous phenomena can provoke the crash of not only aircraft, but also ships.

Scientists have studied satellite images and found that some clouds can reach enormous sizes, up to 80 km. In this case, the waves inside the clouds reach 42 ft.

Additionally, there is powerful turbulence, which is very dangerous for aircraft. Another feature of airplanes is their straight edges.

Randy Cherveny said that the hexagonal clouds found in the Bermuda Triangle are some kind of “air bombs”. Anything that falls into this area can be knocked down, sunk, or overturned.