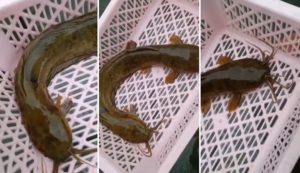 A couple of days ago, a short but unusual video appeared on social networks and began to spread very quickly. A small fish (catfish) was filmed with a second head located in the place where the tail should be.

Fish with two heads is very rare because in nature such mutants usually do not survive and die immediately after birth.

The second head looks fully formed and is not inferior in size to the main head. She also has one of the front fins.

Where exactly this strange fish was caught is unknown, judging by the language, in some of the countries of Southeast Asia or Oceania.

A lot of commentators immediately started joking about the “CatDog” and started asking how this fish poop. Others write that these are “Siamese twins” fish and the anus of the catfish is probably located somewhere in the middle of the body.

There are also many who believe that this is a fake and that the second catfish head was somehow glued to an ordinary living catfish. However, people have previously come across mutant catfish with two heads.

Scientists said that the universe is most likely infinite