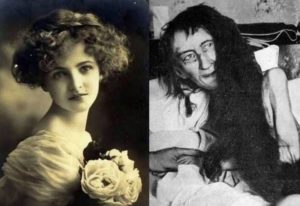 Blanche Monnier (1 March 1849 – 13 October 1913), was a woman from Poitiers, France, who was secretly kept locked in a small room by her aristocratic mother for 25 years.

She was eventually found by police, then middle-aged and in an emaciated and filthy condition; according to officials, Monnier had not seen any sunlight for her entire captivity.

How did the horror begin

Monnier was a French socialite from a well-respected, bourgeoisie family in Poitiers of old noble origins. She was renowned for her physical beauty, and attracted many potential suitors for marriage.

In 1874, at the age of 25, she wanted to marry an older lawyer who was not to her mother Louise’s liking; she argued that her daughter could not marry a “penniless lawyer”.

Her disapproving mother, angered by her daughter’s defiance, locked her in a tiny, dark room in the attic of their home, where she kept her secluded for 25 years.

Louise Monnier and her brother Marcel continued on with their daily lives, pretending to mourn Blanche’s death. None of her friends knew where she was, and the lawyer she wished to marry unexpectedly died in 1885.

On 23 May 1901, the “Paris Attorney General” received an anonymous letter – the author of which is still unknown – that revealed the incarceration:

Monsieur Attorney General: I have the honor to inform you of an exceptionally serious occurrence. I speak of a spinster who is locked up in Madame Monnier’s house, half-starved and living on a putrid litter for the past twenty-five years – in a word, in her own filth.

The officials were skeptical of whether or not the letter’s allegations were true. Still, they recalled the public heartbreak of 25 years prior, when the Monniers’ daughter Blanche vanished without a trace.

Blanche was always known as a very jovial woman with beautiful hair and big eyes. Perhaps the letter was simply just a twisted hoax? Either way, police decided to investigate.

The door to the house had been locked. They knocked, but they ended up having to force the door when no one answered. As the door finally burst open, they were struck with a awful smell. They followed the stench, finally coming to the origin of the smell, which was the attic.

Monnier was rescued by police from appalling conditions, covered in old food and feces, with bugs all around the bed and floor, weighing barely 25 kilograms (55 lb).

One policeman described the state of Monnier and her bed thus:

“The unfortunate woman was lying completely naked on a rotten straw mattress. All around her was formed a sort of crust made from excrement, fragments of meat, vegetables, fish, and rotten bread… We also saw oyster shells, and bugs running across Mademoiselle Monnier’s bed.”

“The air was so unbreathable, the odor given off by the room was so rank, that it was impossible for us to stay any longer to proceed with our investigation.”

Despite a lot of gagging, the police managed to wrap her in a blanket and rush her to the Hôtel-Dieu Hospital in Paris. In the meantime, Madame Louise remained peacefully in the family room of her home. Marcel was found in the room next to the widow.

Her mother was arrested, became ill shortly afterwards, and died 15 days later after seeing an angry mob gather in front of her house.

Accused of being an accomplice, Marcel stood trial alone. He claimed Blanche was insane, and that she had never been restricted, but chose to remain in the room.

“What have I done to be locked up? I don’t deserve this horrible torture. God must not exist then, to let his creatures suffer in this way? And no one to come to my rescue!”

Brother was initially convicted, but later was acquitted on appeal; Marcel Monnier was deemed mentally incapacitated, and although the judges criticized his choices, they found that a “duty to rescue” did not exist in the penal code at that time with sufficient rule to convict him.

After she was released from the room, Monnier continued to suffer from mental health problems. She was diagnosed with various disorders, including anorexia nervosa, schizophrenia, exhibitionism, and coprophilia. This soon led to her admission to a psychiatric hospital in Blois, France, where she eventually died in 1913 in apparent obscurity.

A Skull Staring Back: The Unsolved Homicide of Linda Sherman