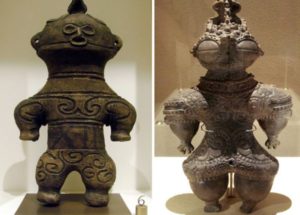 The Dogu statues crafted by the Jomon people of Japan and dated to about 5000 BC have an oddly mechanical appearance. They tend to have large faces, small arms, and hands, and compact bodies. Some appear to wear goggles or have “heart-shaped” faces.

Most have marks on the face, chest and shoulders, which suggest tattooing and probable incision with bamboo. Dogu first appeared in early Jomon but began to flourish in Middle Jomon through Late Jomon and were found all over Japan with northern Japan, the Tohoku region, yielding the most variety.

Archaeologists are baffled by these statues because they resemble no other objects on earth. 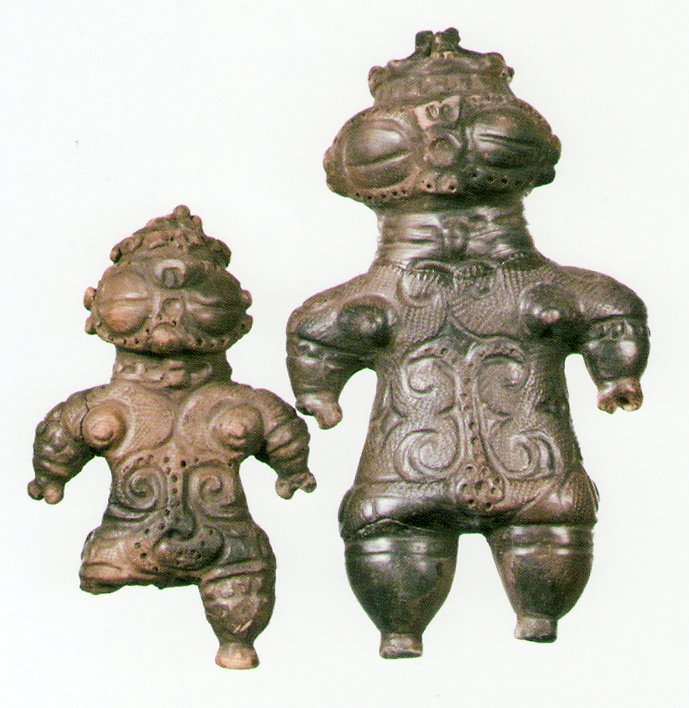 As for Jomon pottery, Dogu has various styles by exhumation area and generation. According to the National Museum of Japanese History, the total number found throughout Japan is approximately 15,000.

Most of the Dogu have been found in East Japan and it is rare to find one in West Japan. Now they can be found in the Japan Archaeological Collection of Tohoku University, Sendai and several museum in Japan.

Although huge numbers of Dogu statues were dug up by archaeologist in various stages of “detail” but many were found broken, and seemingly on purpose. Unbroken figures are rare, and most are missing an arm, leg, or other body parts.

In many cases, the parts have been cut off. The purpose of the Dogu remains unclear but, most likely, the Dogu acted as effigies of people, that manifested some kind of sympathetic magic.

There are many theories on what they were used for with the main agreement being they were a talisman for good health or safe childbirth. As many were excavated in fragments, it’s believed that after the wish was fulfilled, or not, the dogu was broken and thrown on the trash heap; that’s where many were discovered. 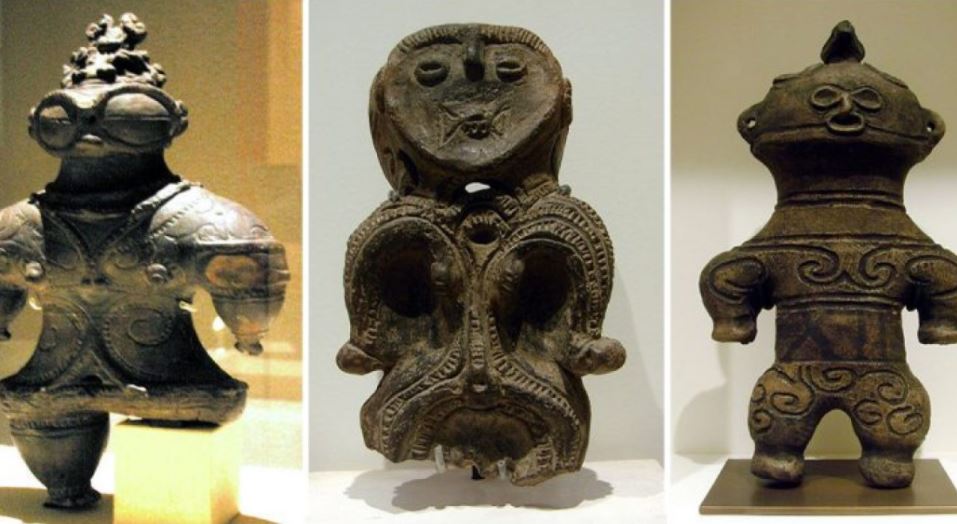 Another theory is that these were goddesses to whom the Jomon people prayed to for food and health. Other explanations are toys for children, funerary offerings, or objects used in some unknown ritual.

And, of course, there are those who believe they were aliens from outer space as ancient astronauts. While Vaughn M. Greene in his books “Astronauts of Ancient Japan and The Six Thousand-Year-Old Space Suit”, argues that these statues are actually spacesuits worn by extraterrestrials who visited earth thousands of years ago.

Dogu statues are totally unique. There are no other figures exactly like them in the ancient world. In several years of research, archaeologists have found indications that these same ancient astronauts were seen all over the world.

There are statues, such as the Tula giants in Mexico, the Tiahuanaco space gods in Bolivia, the Cro-Magnon Venus cult of Europe, which show similar features. Figurines of the 8,000-year-old Mohenjo Daro culture in India are almost identical.

Native Hawaiians: Volcanoes are alive and should be treated like people