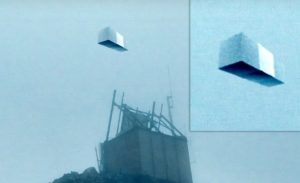 The video shows like a UFO, resembling a metal box was slowly descending from the sky.

In the middle of the 20th century, was very popular a version about alien abductions among lovers of mysterious phenomena. There were witnesses or participants in such an event annually around the world.

To provide a credible evidence of such contact with extraterrestrial intelligence was not possible, as aliens can carefully hide their traces of impact on earthlings. But that has changed.

If you still do not believe that alien civilizations exist, then how can you explain what recently was managed to film in the highlands of New Zealand?

The video was filmed by a group of tourists who gave it to ufologists. Tourists witnessed a strange UFO in the form of a container, resembling a metal box, which slowly descended into a ruined building on the top of a mountain.

The video clearly shows something like a freight elevator, by which aliens raise and lower humans to Earth. Theory about the elevator was offered by American researchers of extraterrestrial civilizations.

Heavy fog has made it impossible to track the entire path of the object, and no one dared to get to the place where it was.

According to most ufologists, aliens really kidnap people for study and then return them back unscathed. They believe that for the test subject such a procedure may resemble a dream.

In turn, conspiracy theorists have suggested that most likely people, animals, and plants are moved into a space in such special containers of this type.