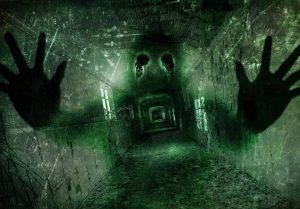 I am a Teaching Assistant at Western Illinois University and have had some interesting run-ins with our departmental ghost.

I have spent many late nights working on the top floor of Simpkins Hall and have experienced some interesting things. Doors, that will stay open without any problems all day long, will shut within five minutes after being opened late at night.

Windows that I have personally closed and secured have suddenly flown open letting cold air fill the room before I can rush and re-shut them. However, the strangest thing to ever happen occurred very early this morning.

After spending much of the night grading papers in the silent offices of the Grad. Asses., I finally lied on the couch to get a couple of hours of sleep before I had to get up and teach. The entire night had been completely quiet, but as soon as I had turned off the lights in the offices and positioned myself for sleep the sound of an electric typewriter being slowly manipulated, as if by a hunt and peck typist, broke the night’s silence.

I knew I was alone and had been since midnight and so I stood up to investigate. I had no sooner risen when the noise stopped. I stood by the couch within the returned silence for about a minute before lying back down. As a covered myself with my jacket for as ablanket, the noise started once again.

This time I remained horizontal on the couch and listened to the typing noise until I was sure that it was not the heating system and was indeed coming from the middle of the room and one of the other Graduate Student’s office.

Once again I arose, but this time I went to the circuit box to turn on the lights to investigate whether or not our prankster Graduate Assistant Dan Bednar was fooling around. I went to the office from which the typing noise had originated, but there was no one there.

I have no idea why I called out the name Harold, but it was the first name that came to mind. Whatever the name of the Simpkins Hall ghost is, he quieted down when I told him too. Others have expressed fear about being alone in the building late at night, but if our building has a specter, he is harmless despite his poltergeist pranks.