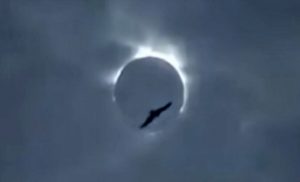 On that day, not a single astronomical phenomenon was observed over the United States. Moreover, according to eyewitnesses, the sun at that time was on the other side, and the moon in this case did not even matter.

And the following happened: the sky, tightly covered with clouds, suddenly lit up with a bright spot, as if the sun was cutting through the clouds.

But this bright glow quickly disappears, and in its place an object appears, very similar to the moon during a solar eclipse. True, this picture lasted only a few seconds.

Ufologists claim that this is a “wormhole” – a portal through which the aliens get into our world: either from their other worlds, distant from us, perhaps millions of light years, or from the future.

It is difficult to say what the Americans captured, but it is clear that most of all it looks like a space-time gap.