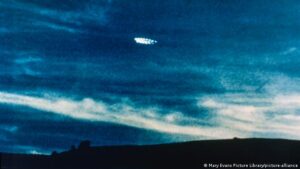 They are called Fastwalkers (or Fast Walkers) and travel at speeds well over 20,000 miles per hour making these UFOs mere “streaks” of light to the unaided human eye.

Their name comes from a 1984 NORAD incident which tracked an unidentified Fastwalker UFO moving at speeds over 22,000 MPH as it screamed towards the earth.

The May 1984 NORAD Fastwalker event

In May of 1984 at 1400 hours Zulu time, an alert was triggered at the North America Air Defense Command (NORAD) when ultra-sensitive orbiting USDSP military satellites (highly-classified satellites that serve as early ICBM launch detection systems) spotted a mysterious UFO heading towards earth at a mind-boggling 22,000 miles per hour.

As it passed in front of Earth and less than 20 miles from the USDSP satellite, officials determined it was not a ballistic missile nor a meteor. After classifying it as “unknown”, it was given the code name “Fast Walker”.

NORAD data revealed the unidentified object was a hot, fast, solid object that swept in quickly from space, approached Earth, then sped off into space. 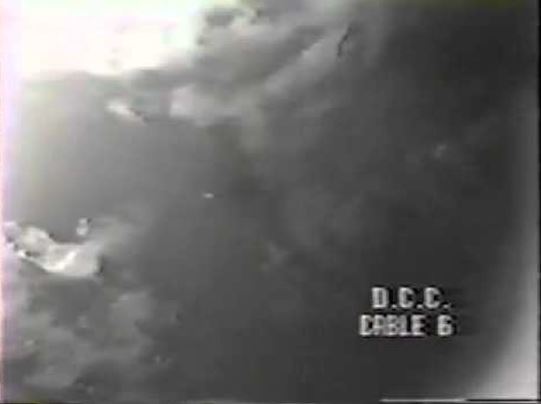 The event was intended to be kept secret but an official (a retired military official) leaked details about the event to an investigator (special agent Joe Stefula) along with a diagram of the incident. According to Stefula:

“I haven’t been able to determine that the document’s absolutely authentic but I have been able to confirm that the DSP printout for that date shows an event at the same time with the same characteristics.

“What makes this particular Fast Walker so peculiar is that it came in from outer space on a curved trajectory, passing within three kilometers of the satellite platform, and then disappeared back into space. Whatever it was, it was tracked for nine minutes.”

The 1984 Fastwalker event obviously alarmed government officials – the sighting resulted in a 300-page internal report which basically “looked at every possibility and couldn’t explain [the unidentified object] by natural or man-made means.” A researcher explained whey the NORAD sighting was significant:

“You have telemetry from that satellite, you have information, you have systems, you have data that you can go back and investigate and check and verify. In the past, usually UFO events are of just eye-witness testimony…

“There you have a very sensitive defense system that sent you information to the ground. I don’t even know if you can solve it… maybe it’s one of those enigmas that’s just gonna be with us forever. What type of craft would have that ability? Some people might say, ‘A UFO’.”

In 1993, after word of Fastwalkers had leaked to the public, the Department of Defense declassified unrelated satellite information which confirmed that satellites were routinely picking up unidentified hi-speed moving objects in space which were neither missiles nor meteorites/asteroids. According to the official who leaked the documents, an average of two to three Fastwalkers are detected each month.

The Observatory Journal documents a “candidate for an alien probe”

Additional stunning evidence was presented in April 1995, when The Observatory journal published an article by Duncan Steel (University of Adelaide, Australia), an expert on the danger of near-Earth objects, that described a recently sighted Fastwalker.

The article revealed that a December 1991 object passing near earth was designated a “candidate for an alien probe”. For all intents and purposes, the object looked and moved like an artificial satellite – only much faster.

Below is a FOIA request submitted in 2013 which confirms NORAD’s search for “Fastwalkers” and “Slowwalkers” in internal document databases produced a representative hit. However, as noted in the response below, information on Fastwalkers is still classified and unavailable for public review. 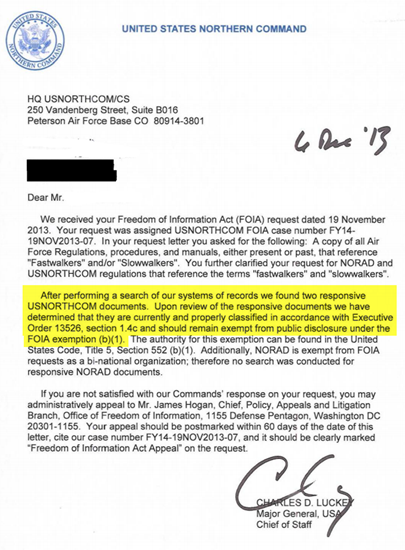 For reference, Fastwalkers travel much faster than orbiting satellites but much slower than deep space asteroids. When discussed together, slower anomalous flying objects are termed “Slowwalkers”.

Many in the UFO community theorize the Earth may be under surveillance by advanced alien races whose motives are unclear. They believe Fastwalkers are alien surveillance vehicles or probes which conduct routine surveillance missions gathering data on our planet and its inhabitants.

They surmise that governments know of their existence, and their intent, but choose to keep details of their activities from the public.

Former US astronaut talks about UFOs he has witnessed: “The government is lying to us”