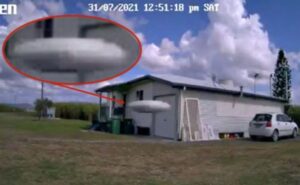 UFO shows up in only one single frame. This single image of a UFO proves that crafts equipped with advanced technology flying through the sky that are not visible to the naked eye due to their enormous speed.

Fastwalker is a code word created by NORAD (North American Air Defense Command) to classify unidentified flying objects which approach our Earth from space and enter our atmosphere.

It has been reported that from its subterranean facility deep inside Cheyenne Mountain Colorado, USA, the Air Force NORAD facility tracks a rough average of 500 of these Fastwalkers each year.

In 1993, after word of Fastwalkers had leaked to the public, the Department of Defense declassified unrelated satellite information which confirmed that satellites were routinely picking up unidentified hi-speed moving objects in space which were neither missiles nor meteorites/asteroids.

Algorithm predicted the death of human civilization by 2050