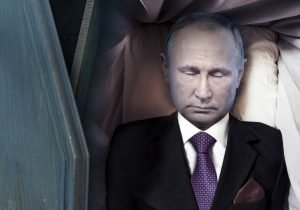 The outlook for the owner of the Kremlin is far from rosy. There is a high probability that putin will not live until the end of spring.

Russian aggressor *vladimir putin is ill, says eminent astrologer and psychic Max Gordeev. The expert compiled Putin’s horoscope – and the prospects for the owner of the Kremlin are not at all rosy. He said this in an interview with vgorode.ua.

Gordeev assured that Putin was already dying: the Tarot layout gives him the Death card.

Only very strong healers from his environment save Putin from death, but the vital energy of the owner of the Kremlin has practically dried up, he has almost no energy reserves left.

At the same time, Gordeev clarified that, as a psychic, he sees a “terrible disease” in Putin.

“His demise is near,” the astrologer assured.

And Putin should no longer count on help: at the end of his alignment, the Tower card falls out, which is interpreted as a card of drastic changes, wild aggression and a fatal fall. This is a card of shock – and very soon.

Gordeev believes that Putin will die a natural death (his opponents should not count on the suicide of the dictator: he will never take such a step).

But there is a second option: Putin can run away and hide in some deep hole. He will do this only if he realizes that “his time has come to an end.”

* – The editors of zenonas.sg-host.com refuse to show respect for the occupiers and murderers and will write some proper names exclusively and fundamentally with a small letter. No war!