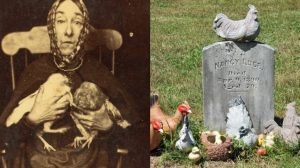 Nancy Luce was born at home in West Tisbury on August 23, 1814, the only child of Philip Luce and Anne Manter.

She lived her entire life at the farmhouse near the head of Tiah’s Cove in West Tisbury, and it was there that she cared for her parents and raised animals, mostly chickens. Nancy found that the necessity to care for her sick parents, plus to struggle alone with the farm, made life unbearable for her.

Nancy ran a store on the property and she traded hand-knit stockings, some she made herself from her own sheep’s wool, for tobacco, which she sold to neighbours. She also sold eggs from her chickens and little books she herself wrote.

She was 27 when her mother died and 31 when her father died. After her father’s death, two neighbours petitioned to have a guardian appointed for Nancy because of her “insanity and imbecility.” 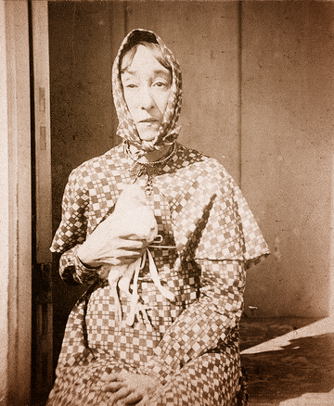 Her doctor and some of her relations successfully opposed this, although this turn of events must have further enhanced her desire to live alone away from people and concentrate solely on tending to the animals on her farm, as these creatures, her writings reveal, were her only friends.

In 1840 when Nancy was 36, she became ill and could no longer go horseback riding, she could still milk the cow however. One of her close friends, she wrote, was a three-legged cow named Red Cannon.

She gave her beloved chickens names, and when they died had tombstones made for them and these are now on display at Martha’s vineyard museum. Teeddla Toona, Levendy Ludandy and Otte Opheto are but a few of the chickens names etched into the tombstones.

She lived a solitary life, with few friends and her chickens were her only company. She was forced to write to the local newspapers on more than one occasion begging the townsfolk to keep their young boys away from her farmstead when she became subjected to mockery and ridicule from local boys who would harass both herself and her beloved chickens.

Nancy Luce died on April 9, 1890, and each year around that time, and Halloween, the chickens around her grave begin to increase, even after more than a century, although no-one knows why or who leaves them there. Nancy Luce is interred at the West Tisbury Village Cemetery, Dukes County in Massachusetts.