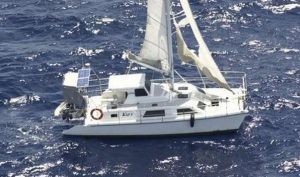 On 18 April 2007, Kaz II a 12 meter catamaran was found drifting 163 km off the northern coastline of Australia with its engine running, and a table laid for dinner, but there have been no signs of any people. On 20 April, maritime authorities caught up with the yacht and boarded it.

Jon Hall, one of the Australian rescuers said there was clearly no sign of the crew, and it was a bit strange because everything looks normal. Rescuers have retrieved the boat’s GPS system to examine data for clues to the mysterious disappearance of the crew. Until now the fate of her three-man crew continues to be unknown, and the mysterious situations in which they disappeared have been compared to that of the Mary Celeste.

Based on Australian Maritime Safety Authority document, Kaz II was departed on 15 April 2007 from Airlie Beach. There have been 3 people onboard the ship, Australian media reported the names of the sailors as skipper Derek Batten, 56, and brothers Peter and James Tunstead, ages 69 and 63. The three are neighbors in Perth, Western Australia.

The Kaz II was noticed by a chopper on Wednesday (April 18) drifting off the Great Barrier Reef, but a rescue team only reached the boat on Friday, and confirmed that there was no one aboard. Law enforcement said weather conditions at sea on Sunday and Monday were rough.

Rescue crews say they are confused by the mysterious disappearance. “The engine was running, the computer systems were running, there was a laptop set up on the table which was running, the radio was working… and there was food and utensils set on the table ready to eat,” said Jon Hall, a spokesman for Queensland’s Emergency Management office. “It was a bit strange,” he added.

Officials also confirmed that the boat’s emergency systems, including its radio and GPS were fully workable, and that it still had its full complement of life jackets. According to news sources, there was even a small boat still hoisted on the stern of the boat and the anchor was up. The only signs, other than the disappearance of the crew, that were out of the ordinary, were damage to one of the boat’s sails and that there was no life raft on board (it is unknown whether there ever was one aboard).

The researchers also recovered a video recording that showed footage taken by the crew during their trip. It revealed some clues as to the men’s last day. The last footage, filmed by James Tunstead on 15 April at 10:05 A.M. local time, shortly before the men disappeared, showed, among other things:

– Batten was at the helm.
– Peter Tunstead is sitting on the aft stairway of the boat; he is fishing.
– A long white rope can be seen trailing behind the boat.
– The engine is not running.
– Fenders can be seen hanging from safety rails on both sides of the boat.
– The camera is panned 360 degrees and shows islands and surroundings; this helped investigators pinpoint the exact location of the ship.
– The sea is choppy and none of the men are wearing a life jacket.
– Tunstead’s shirt and glasses are not in the place where they were later found.

Based on the video footage and the eyewitness accounts, the investigators concluded that they were sunk beneath the waves. According to authorities in Townsville, the weather had been windy and the sea had been rough between the time that the Kaz II departed and was found drifting. This led authorities to speculate that the crew may have experienced some form of sudden difficulty during rough weather and gone overboard. However, one issue with this theory is that contents of the cabin, including a table, did not seem to have been disrupted in any way.

Other speculation about the crew’s disappearance also have been put forward. One of the hypotheses include that the boat became stuck on a sandbar near George Point, where the boat’s last radio message was made. When the men jumped overboard to push it free, a gust of wind blew and the boat drifted away, leaving them stranded. This would explain why towels were left out on the deck. Another hypothesis is that one crew member may have been washed over by a freak wave and that the others were lost attempting to save him.