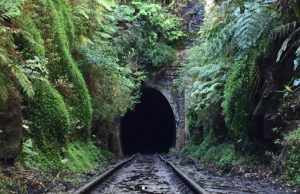 Lost in the back roads of Virginia along the Clinch Valley extension of the Norfolk and Western Railway, there’s a small rail tunnel no longer than 200 meters long that is home to two ghosts who have been known to say some utterly creepy things to those brave enough to listen.

Then there are the noises, like the gates to Hell are open, described by railway flag-man John Peery as sounds “no man could stand”. Welcome to Big Bull Tunnel…

On the afternoon of July 17th of 1905 Peery’s freight train was forced to an abrupt stop just past the tunnel due to mechanical issues. Fearing a collision Peery rushed into the tunnel to set flags at the far end, but only minutes later he emerged shaking and pale.

He reported to the conductor that in the tunnel he had heard those sounds which “no man could stand”. Given his obviously terrified composure both the conductor and the engineer entered the tunnel to investigate. What they found were the groans and screams of agony from invisible men.

All three men determined that the sounds were coming from the solid stone wall. The conductor addressed the phantom or phantoms and to their terror received a response. “Remove that awful weight from my body” was the reply. Some moments of silence passed when another voice stated: “They are drinking my blood”.

The daylight allowed for a thorough investigation of the stones, as the engineer had begun to speculate that somebody was hiding behind them playing tricks, but not even a crack on the mortar could be found.

By August the report had made its way to the Pittsburgh Press, which upon investigation discovered that two deaths had occurred in Big Bull Tunnel. In 1901 an engineer named Robert Lemon was caught in a freak accident inside the tunnel when his skull was crushed.

In 1904 a flag-man keeping watch on the caboose section was torn from his fast moving train inside the tunnel and did not survive the trip to the hospital, he was married only two months at the time of his death.

Peery and his crew’s experience at Big Bull Tunnel was not the first account of paranormal activity, only the most credible. For some time residents in the area had been reporting “hair-raising” and disturbing sounds emanating from the empty tunnel.

By that afternoon in 1905 the tunnel was already well regarded as haunted and even dangerous, and to most reasonable residents considered somewhere they would avoid at all costs.

Today Big Bull Tunnel is just as haunted as it ever was – the sounds are still heard by anybody that goes near and train crews hold their breath as they pass through. Despite being one of the lesser known paranormal locations, Big Bull Tunnel has had a number of investigators visit, looking for evidence or looking for trickery, but neither has been found.