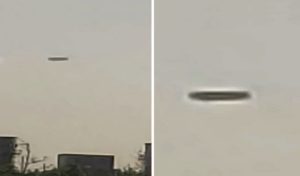 On November 15, 2020, over Hollywood, Florida, local residents observed the appearance of an unidentified flying cigar-shaped object. Moreover, it was clear that the object was trying to hide itself.

Videos from the scene appeared on the Web and caused heated discussions among users.

Eyewitness states: “We noticed this huge object in the sky just sitting there by the Hard Rock Casino in Hollywood FL. It actually blurred itself out when we started recording it was huge it didn’t do much but just sit there and blurred itself out. I have tried to Google to find out what it was but I’m coming up with nothing. It was my husband, 2 kids, and I who witnessed this.”

The famous ufologist Scott Waring draws the attention of users to the fact that the unidentified object has neither a tail, nor wings, nor an engine.

“This is very strange”, says Waring, and he is 100 percent certain that this object was not visible on the radars of the nearby airport, otherwise his services would have taken appropriate security measures.