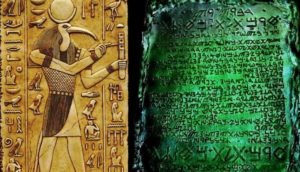 The Emerald Tablet is an ancient artifact whose current whereabouts are unknown. What was written on it is the foundation of Hermetic Philosophy and perhaps it contains a recipe for preparing the philosopher’s stone which can turn metals into gold.

Or else it symbolizes the spiritual equivalent, purifying the soul. Versions of its text became known to the Christian world after the fourteenth century through Arabic translations.

The physical Emerald Tablet was described as a rectangular object of exquisite workmanship, with its sacred message written in bas-relief or carved out, using an alphabet similar to Phoenician.

Supposedly this tablet is made of emerald, a gem cherished by the ancients. But since large quality emeralds from the old world (if it was from the old world or from earth even) probably never existed and since there is confusion over what was, and what was called an emerald in the old world, it was perhaps more likely another green crystal, jasper or jade. It may have been simply green colored glass. 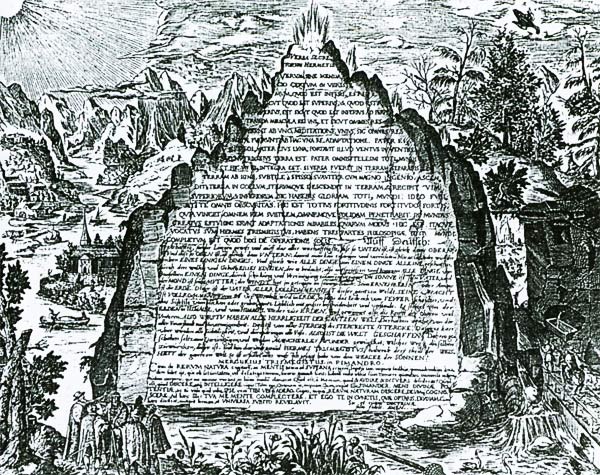 Most consider the writings on the Emerald Tablet to be one of the earliest of all extant Western alchemical works, originating from pre-Greek sources. In mystical circles it is still popular with modern-day alchemists. The writings are considered to belong to the Hermetic Tradition, a non-Christian branch of Hellenistic Gnosticism.

The Arabs called alchemy the Hermetic art. There were generally two types of Hermetic writings, philosophical and alchemical/magical. Like many texts from this era, most of these texts (the Corpus Hermeticum) were lost somewhere, sometime in history and nobody really knows how many there were.

The roots of the Emerald Tablet are not so easy to pin down. The magic or spiritual secrets that it imparts came directly from Hermes himself, the messenger of the gods, and lord of magicians.

Or more specifically, Hermes Trismegistus, a Hellenistic Egyptian mix of Hermes the Greek god and Thoth the Egyptian god. The Greeks in Egypt at the time thought Hermes was the same as Thoth. They are similar in many ways although there are some differences too and some Greeks did not accept this version of the god.

Both gods were gods of wisdom, science, magic and the afterlife who taught man how to do all manner of things. The stories and the origins of these gods go back very far into murky history, 10,000 years ago and beyond. And with them go the stories and possible origins of the tablet that they/he created. But that is what makes it interesting, that it could be a surviving thread of ancient wisdom.

Legends have placed the tablet in various locations, for example, in the Ark of the Covenant, found in Sri Lanka, hidden in the Great Pyramid by Alexander the Great and found and hidden in other caves in the middle east.

But what do we know exactly of the text? The portions or versions that survive today have been translated from Arabic, Latin, Chaldean, and Phoenician, by notable figures such as Isaac Newton and Madame Blavatsky.

It recounts succinctly the central points of alchemy – that we can access the ultimate truths of our existence from understanding the vital and mysterious relationship between earthly and heavenly things.

Here is a version from Diane Morgan’s book From Satan’s Crown to the Holy Grail: Emeralds in Myth, Magic, and History:

It is true without falsehood, certain and absolutely true.

What is below is like what is above and that which is above is like that which is below, for the performance of the miracles of the One Thing. And just as all things come from that One, through that One’s meditation, so all things in nature are adapted from It.

Its father is the Sun. Its mother is the Moon. It will carry the wind in its belly. Its foster-mother is the Earth. Here is the father of all the perfected designs of the world. Its power is complete if it is integrated with the Earth. You will part the Earth from the Fire, the Subtle from the Heavy, sweetly, with great genius.

It ascends from the Earth into Heaven, then descends again to Earth and receives powers from things below and above. Thus you will have the glory of the entire world. Therefore all obscurity will flee from you. This is the Force of all Forces, which conquers all subtle things and penetrates all solid things.

Thus the world is created. Here are miracles opened, the method of which is here. Thus I am called Hermes Trismegistus who have three parts of the Philosophy of all the world.

What I have said of the operation of the Solis is completed.

Some claim that further works of Thoth/Hermes are awaiting rediscovery in a secret hidden library. There has long existed this idea, as far back even as the ancient Egyptians people where looking around for the works of Thoth.

It was written about by Clement of Alexandria in the early Christian era. He claimed that 42 sacred books exist and these books or tablets are hidden away until mankind is worthy to read from them.

Ancient texts reveal: Earth was ruled for 241,000 years by 8 kings who came from heaven