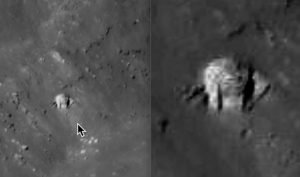 Famous ufologist and virtual archaeologist Scott Waring spoke about his discovery on the surface of the moon. He is sure that he managed to find a real base belonging to an alien civilization.

The ufologist discovered this strange structure back in 2013, but once again decided to make sure that NASA did not remove it from its archive. As it turned out, the picture with the object is in place and you can still study it.

According to Waring, the structure is located in the crater Aristarchus, which is 40 km across. That is, the “alien” structure itself is about 250 meters in diameter.

The picture has good detail. The researcher invites netizens to independently explore the mysterious structure on the NASA website. If there is no time and desire for this, the ufologist offers to watch a video in which he demonstrates an object from different distances.

Scott Waring believes that NASA deliberately distorts photographs so that it is impossible to determine what these structures are.

It is this circumstance that gives the ufologist reason to believe that aliens are present on the moon, but scientists are doing everything so that the public does not know about it.

Researcher discovered another mysterious structure on the moon