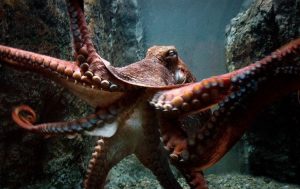 Aquatic creatures hold numerous secrets, so researchers thought it would be a good idea to unravel some of them. From the plethora of marine wildlife, biologists have picked up the octopus to be their test subject, so they broke down its DNA to see what it held.

After completely sequencing its genome, scientists reached an unexpected conclusion – that octopuses are entirely distinct from any other animals on Earth. The results yielded astounding numbers – over 33.000 protein-coding genes were identified. That’s more than what human beings possess. (scientists can’t agree on either 14 or 25,000 genes)

Dr. Clifton Ragsdale, researcher at the University of Chicago offered extra details about the significance of this find. According to him, “the octopus appears to be utterly different from all other animals, even other molluscs, with its eight prehensile arms, its large brain and its clever problem-solving abilities.”

With 168 neuron-development regulating genes, almost twice the number found in any mammal, and a neural grid consisting of 1/2 billion neurons scattered from head to the prehensile arms, the octopus can easily outperform most marine creatures.

Their curious nervous system is ramified into their elongated arms, and if one gets dismembered, the octopus is still able to use its cognitive abilities, as if it had an individual nervous system in each of its arms.

Octopus DNA left scientists with a feeling that it was highly rearranged, similar to a shuffled deck of cards. This conclusion was based on the fact that octopus’ genetic code was discovered to be comprised of a number of transposons, or “jumping genes,” that leaped across the genome changing its structure.

“With a few notable exceptions, the octopus basically has a typical invertebrate genome that’s just been completely rearranged, like it’s been put in a blender and mixed,” said Caroline Albertin, once of the marine biologists at the University of Chicago.

“This leads to genes being placed in new genomic environments with different regulatory elements, and was an entirely unexpected find.”

Another interesting feature of this aquatic wonder is it’s ability to perfectly blend in with ithe surroundings. This chameleonic behavior is triggered by six protein genes named “reflectins” which impacts the way light reflects off the octopus’ skin, thus turning it into assorted patterns and textures that camouflage the octopus.

Part of the coleoid sub-class of the molluscs are the octopus, cuttlefish and squid. These creatures evolved over a period of over 500 million years, and are known to inhabit almost every body of water at nearly any depth.

Their adaptability consists in extremely flexible and fluid bodies, an insane visual system which allows them to perceive colors although they’re technically colorblind, and of course their camouflage native technique.

Octopuses received the “alien” label ever since late British zoologist Martin Wells had studied them, but Charles Mudede warns not to interpret “alienness as a matter of DNA,” but instead as a matter of diversity.

“But, no matter how crazy an animal’s DNA might appear, it is probably from this planet if its cells contain the energy-generating organelles called mitochondria,” Mudede wrote.

With all this “out of this world” evidence at hand, it’s hard not to see the otherworldly traits of octopuses, especially their ability to redesign their DNA for a flawless life experience and extreme survivability.

Could this be just a complex and misunderstood evolutionary process? Or were these tentacled invertebrates brought to Earth from another place in the universe, by some unknown civilization that we can only speculate of?

Whatever the case, it’s sure interesting to picture these unusual beings as the ancient companions of an aquatic alien species from a remote past. We cannot safely assume this was the case, but at the same time it’s hard to deny the ‘alien’ implications in this story. Oh, and make sure to throw an eye on the video below for more awesome insight.

Unusual version of the scientist, why aliens do not make contact with us