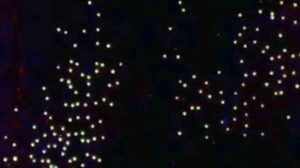 The fleet of mysterious luminous objects was once again recorded by the cameras of the International Space Station (ISS).

The last time a similar phenomenon was observed in the spring of 2020, but this time there were much more objects – more than 100 units.

Some researchers have suggested that these could be Starlink satellites designed to create a global wireless Internet. However, the corporation’s apparatuses move mainly in long, slender rows, but in this case it was not like that.

The version that city lights were captured on the video is also not confirmed, since all UFO lights are of the same size. Cities, depending on their size, when viewed from space, have different magnitudes of lights.

Also, the ISS circles the Earth in roughly 93 minutes, completing 15.5 orbits per day then we should see this kind of city lights on the live feed every day, but that is not the case, which makes you wonder why these kinds of formations appear again or are we being watched?

Users are wondering why there are no reports of UFO sightings from space corporations? Researchers around the world record everything that the ISS camera captures, but if something strange enters the field of view, the scientists are silent and do not give any answer.

It turns out that the corporation scientists themselves understand that something strange is happening in space near the ISS, but they do not dare to express their thoughts.

The last time the UFO fleet was captured by the ISS camera, the coronavirus pandemic began its “march” across the planet. Some researchers ask the question, is it possible for us to have another wave, which will be stronger than the previous one?