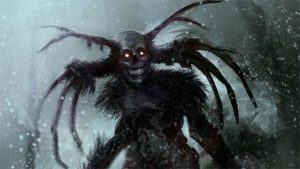 The Wendigo was part of the folklore of various AmerIndian tribes, especially the Algonquians. Both natives and settlers claim to have seen this being.

Some consider this creature to be a creation of Algernon Blackwood in his short story, The Wendigo, published in 1910. The being was and is real to many living around the Great Lakes.

There’s some confusion with the names “Wendigo” and “Windigo.” Most people use the two terms interchangeably. Others say they’re different; the former is a living creature, the latter, a spirit. Some consider it a cryptid.

There are many legends about a mysterious creature who was encountered by people in the Great Lakes’ forests. In one variation, the creature could only be seen if it faced the witness head-on, because it was so thin it couldn’t be seen from the side. The Wendigo had a ravenous appetite for human flesh. Forest dwellers who disappeared were said to be its victims.

The Inuit tribe called the creature by various names, including Windigo, Witigo, Witiko and Wee-Tee-Go. All were roughly translated as the evil spirit that devours humans. A German explorer translated Wendigo as cannibal. The Wendigo is also known as a spirit of lonely places.

AmerIndian descriptions of the creature spoke of a gigantic being that had once been human but was transformed into a Wendigo by magic. The creature is usually said to have glowing eyes and long yellow fangs. Most have sallow skin; others are matted with hair. Wendigos are created when humans resort to cannibalism for survival.

Some people believe that the legend of the Wendigo is based on a cryptid Bigfoot-like creature that was responsible for many unexplained human disappearances.

Encounters With the Wendigo

Thereare an array of Wendigo sightings throughout the years, including the following reports.

There have been numerous Wendigo sightings in Minnesota. There was an outbreak of publicized sightings around the beginning of the 1900s. Perhaps some of these were inspired Blackwood’s story.

A Wendigo allegedly was sighted numerous times near Rosesu, Minnesota from the late 1800s through the 1920s. Every time it was seen, an unexpected death followed. It was considered a death omen. Wendigos have been sighted in Ontario near the Cave of the Wendigo and around Kenora for decades.

Jack Fiddler was a Cree Wendigo hunter. He claimed to have killed at least 14 of them. His last slaying resulted in incarceration. In October 1907, Fiddler and son Joseph were tried for murdering a Cree woman. They pleaded guilty and defended themselves by averring the woman was possessed by a Wendigo’s spirit. She had to be killed before she murdered others

Is the Wendigo a Cryptid?

If the creature is a legend or a myth, why do some classify it in cryptozoology? Cryptids are hidden or unidentified mystery animals such as the Almas, a hairy biped, and Wisconsin’s werewolf.

They’re animals who have been sighted, photographed, heard, left tracks and/or scat, but haven’t been proved to exist by being captured or killed. They can be those believed to be extinct or animals found in areas alien to them.

Some theorize the Wendigo is a version of Big Foot, Sasquatch or Yeti. Others postulate the creature is a cross between Big Foot and a werewolf. There are those who view the Wendigo as a solitary human-beast, living in the forest, feeding on humans.

What is a Wendigo?

According to folklore, a Wendigo is created when a human resorts to cannibalism to survive. It’s possible the legend was created to discourage this practice when people were isolated by winter ice and snow, like the Donner party did.

Both AmerIndians and settlers claimed they saw the Wendigo. It’s possible that the Wendigo is a hairy biped or that Big Foot has been misidentified as the creature when sighted.