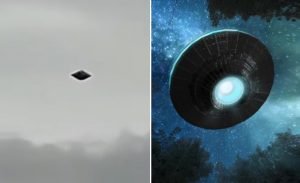 The video we’re showing you is another disc-shaped UFO sighting filmed in Mexico.

This time it happened on August 28, 2021, when Mexican citizen Massimo Garcia, driving his car on the outskirts of Mexico City, noticed a slowly moving disk-shaped object in the sky.

As soon as he noticed the UFO, Massimo Garcia, who was in the company of friends, stopped in his car to shoot an object that rotated by itself and was dark gray-black in color.

From analyzes provided by UFO researcher Carlos Clemente it becomes clear that this object has the same characteristics as those similar to it.

The flying saucer resembles other similar objects noticed and documented in Colombia, Costa Rica, Panama and other South American countries.