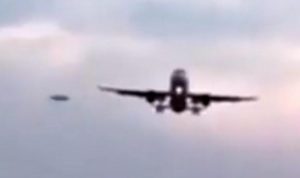 The British captured on video how a UFO flies at high speed near a passenger plane. The incident took place on August 26 in Yorkshire, Northern England.

According to eyewitnesses, the huge disc-shaped object had a dark gray color. People were surprised at the incredible speed of the flying saucer: in comparison with it, the plane seemed to be hanging in the air. A mysterious object flew right in front of the windows and flew past.

The video that is now actively circulating on the Internet makes it possible to compare the size of an aircraft and a UFO.

Interestingly, the airport’s radars did not detect the unidentified object. Moreover, absolutely nothing was seen in the control tower.

Later, this video was analyzed by UFO hunter Scott C Waring. In his recent website post, Waring claimed that aliens have visited England to gather data.

“This UFO came so close I’m surprised it didn’t collide with the jet. These things or so highly skilled they can make such mauves as this…its just insane! That UFO came with less than a meter of the jet with hundreds of passengers on it. Sounds like aliens care more about data they gather than human lives,” wrote Waring on his website UFO Sightings Daily.

Waring also criticized the technology used in airports to detect unknown objects that could pose a threat to airplanes that might be landing or taking off.

“This object is huge, about the size of a car and yet the control tower and airport workers had no idea it was even there. It goes to show you how ancient our radar technology really is,” added Waring.