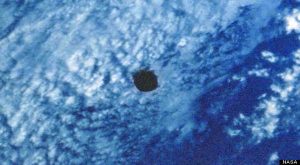 Someone has found a five-mile-wide black disc hovering over the ocean in a NASA photograph.
The disc was discovered in a picture taken November 2013, the original version of which is still available on NASA’s website.

The website says that while the UFO appears to be above the ocean, it’s actually hiding underneath it – though not very well, clearly.

“This shows a huge stealth black disk over the ocean. The measurements are almost perfect. Streetcap1 of Youtube found this one and I have to say its beyond words. This UFO looks to be more than 5-7 miles across. Since it is over the ocean area, the only place that it could hide without being noticed is below the ocean.”

They also published the video analysis of the image: