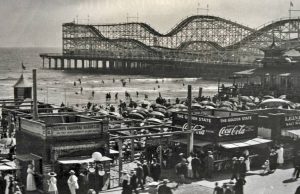 Did you ever hear the funhouse mannequin’s urban legend, which was actually a dead body? The story goes that children and parents had a great time exploring the funhouse in an amusement park somewhere in the small town of America and that a fake mummy was among the attractions.

Some years later it would be discovered that the mummy was in fact a dead man’s corpse. Great urban legend, right? Sorry to tell you this, but every word of it is true. Welcome to “The Pike”….

“The Pike” was an amusement park in Long Beach, California and it had been around since 1902, nothing to do with hosting a corpse as an attraction, but the park finally shut down in 1979. Three years prior to The Pike’s closing the ABC network was filming an episode of The Six Million Dollar Man entitled “Carnival of Spies” on the fair grounds.

Workers preparing the funhouse for the grand finale scene accidentally knocked the arm off of one of the mannequins, so they did what any worker would do; act like nothing happened and try to reattach the arm. That’s when they spotted the human bones.

The corpse was that of Elmer McCurdy, and he had been on a bit of an adventure over the last sixty or so years. When investigators began to examine the corpse they were shocked to discover a penny from 1924 and a ticket from Sonney Amusement’s Museum of Crime wedged in his throat. Further investigation revealed a gunshot wound to the chest and the bullet still inside. It was the bullet that really broke the case, investigators traced it to its point of manufacturing.

As it would be discovered, Elmer was a train robber active from about 1905 to 1911 when he was tracked down by a local posse of citizens in Osage Hills, Oklahoma and shot with a Winchester 32-20 rifle. Elmer’s body was taken back to Pawhuska, Oklahoma where in keeping with the times the outlaw’s body would be put on display as a warning to others.

He was embalmed and became a local attraction as “The Bandit Who Wouldn’t Give Up”. Over the next sixty years the corpse would be featured in the funhouses of no less than 12 different carnivals and amusement parks ranging from Mount Rushmore, South Dakota, and to his final place of discovery in California.

Today Elmer is buried in the Boot Hill section of the Summit View Cemetery in Guthrie, Oklahoma under two cubic yards of cement, a precaution ordered by the undertaker in charge in an effort to prevent future travel and display.

Although “Carnival of Spies” was interrupted and reshot at a later date, that wasn’t the first film to be shot in “The Pike” funhouse. In fact, Elmer’s corpse can be seen in several portions of the 1933 exploitation film “Narcotic”.