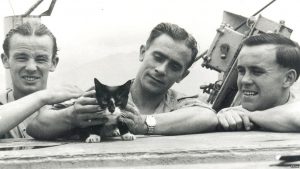 Simon was the ship’s cat who served on the Royal Navy sloop HMS Amethyst, who was famously awarded the rank of “able seacat” for services rendered. In 1949, during the Yangtze Incident, he received the PDSA’s Dickin Medal after surviving injuries from a cannon shell, raising morale, and killing off a rat infestation during his service.

Simon was found as a kitten, believed to be about a year old at that time, wandering the dockyards of Hong Kong in March 1948 by Ordinary Seaman George Hickinbottom, who was a member of the crew of the British frigate HMS Amethyst, which had been stationed in the city in the late 1940s. Hickinbottom smuggled the undernourished cat aboard ship, and Simon soon ingratiated himself with the crew and officers, particularly because he was adept at catching and killing rats on the lower decks. Simon rapidly gained a reputation for cheekiness, leaving presents of dead rats in sailors’ beds, and sleeping in the captain’s cap.

The crew viewed Simon as a lucky mascot, and when the ship’s commander changed later in 1948, the outgoing Ian Griffiths left the cat for his successor Lieutenant Commander Bernard Skinner, who took an immediate liking to the friendly animal. However, Skinner’s first mission in command of the Amethyst was to travel up the Yangtze River to Nanjing to replace the duty ship there, HMS Consort. Halfway up the river the ship became embroiled in the Yangtze incident, when Chinese Communist gun batteries opened fire on the frigate. One of the first rounds tore through the captain’s cabin, seriously wounding Simon. Lieutenant Commander Skinner died of his wounds soon after the attack.

The badly wounded cat crawled on deck, and was rushed to the medical bay, where the ship’s surviving medical staff cleaned his burns, and removed four pieces of shrapnel, but he was not expected to last the night. He managed to survive, however, and after a period of recovery, returned to his former duties in spite of the indifference he faced from the new ship’s captain Lieutenant Commander John Kerans.

While anchored in the river, the ship had become overrun with rats, and Simon took on the task of removing them with vigour, as well as raising the morale of the sailors. Following the ship’s escape from the Yangtze, Simon became an instant celebrity, lauded in British and world news, and presented with the “Animal Victoria Cross”, the Dickin Medal, as well as a Blue Cross medal, the Amethyst campaign medal, and the rank of “Able Seacat”. Thousands of letters were written to him, so much that Lt Stewart Hett was appointed “cat officer” to deal with Simon’s post. At every port on its way home that the Amethyst stopped, Simon was presented with honour, and a special welcome was made for him at Plymouth in November when the ship returned. Simon was, however, like all animals entering the UK, subject to quarantine regulations, and was immediately sent to an animal centre in Surrey. 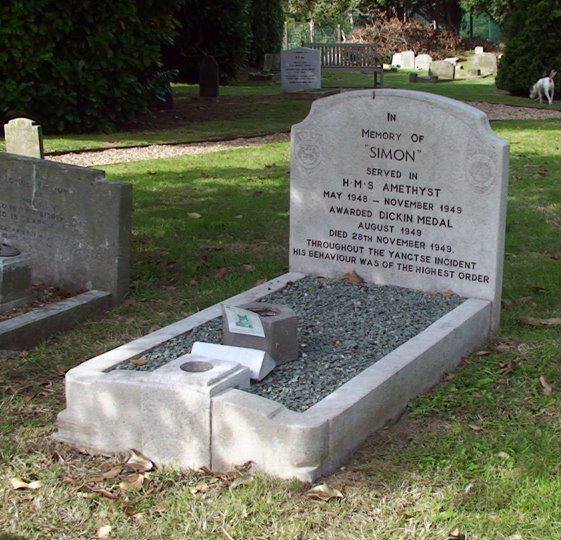 Whilst in quarantine, Simon contracted a virus and, despite the attentions of medical staff and thousands of well-wishers, he passed away on November 28th 1949 aged just 2 years. His funeral at the PDSA Ilford animal Cemetery in East London was attended by hundreds of people, including the entire crew of the HMS Amethyst.

His gravestone reads as follows: “In memory of “Simon”, served in H.M.S. Amethyst May 1948 — November 1949, awarded Dicken medal August 1949, Died 28th November 1949. Throughout the Yangtze incident his behaviour was of the highest order” ….it is an astonishing tombstone for the brave cat, and if you didnt know the story you would automatically think it was the tombstone of a person not that of a cat.

Simon the cat is interred at the PDSA Animal Cemetery in Ilford, East London.