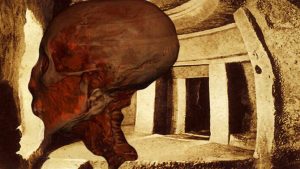 Remains of an enigmatic race with elongated skulls and a short stature were unearthed inside a 5,000 years old archaeological site in Malta.

As we step further into the world of archaeology we come across details that, little by little, complete this intricate puzzle posed by our ancient history. Scientists keep making discoveries that tie various regions on the globe over periods of time that in the future may form an ensemble picture.

One special and intricate case is represented by the Hypogeum of Hal-Saflieni, a subterranean site dating from somewhere around 3300 – 3000 B.C. It proved to be a necropolis after the remains of over 7000 bodies with elongated skulls were uncovered, bones unlike any ancestor on the evolutionary scale. 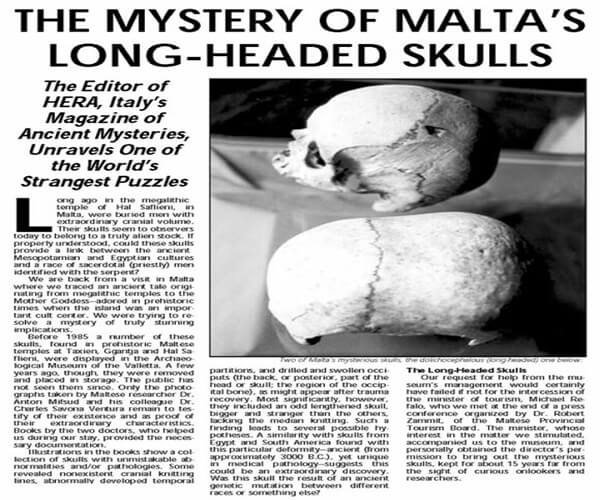 The discovery had happened in 1902 while the workers on a construction site broke through the roof by chance. Like many other major discoveries, it happened as a result of an accident and. Fortunately for us, the attempts to cover-up the underground megalithic structure had all failed.

Manuel Magri led the excavations. He was a pioneer of archaeology and a Jesuit priest, member of The Society of Jesus. Under suspicious circumstances, the priest died just before the publication of the excavations report, in 1907.

The official report described the megalithic tomb as a massive catacomb on three levels, sculpted in more than 2000 tons of rock. Its walls were ornate with various geometrical figures such as spirals, pentagons and floral themes or animal drawings.

In support of this discovery stands an extract published by the National Geographic magazine in the 1920s describing the first inhabitants of Malta as a race with elongated skulls.

“From an examination of the skeletons of the polished-stone age, it appears that the early inhabitants of Malta were a race of long-skulled people of low to medium height, akin to the early people of Egypt, who spread westward along the north coast of Africa, whence some went to Malta and Sicily and others to Sardinia and Spain.” – National Geographic Magazine, January to June, 1920 Volume XXXVII.

The Hal-Saflieni site links to numerous chambers, some serving as tombs, and others as sanctuaries:

The first layer is 10 meters below the surface and consists of natural caves that later were extended artificially.

The second layer reveals the main chamber forking into other chambers. Statues such as the intriguing “Sleeping Lady” were dug up in the first room. On the same level it’s the unique Oracle Room exiting to the Decorated Room characterized by smooth walls and elaborate pattern of spirals. 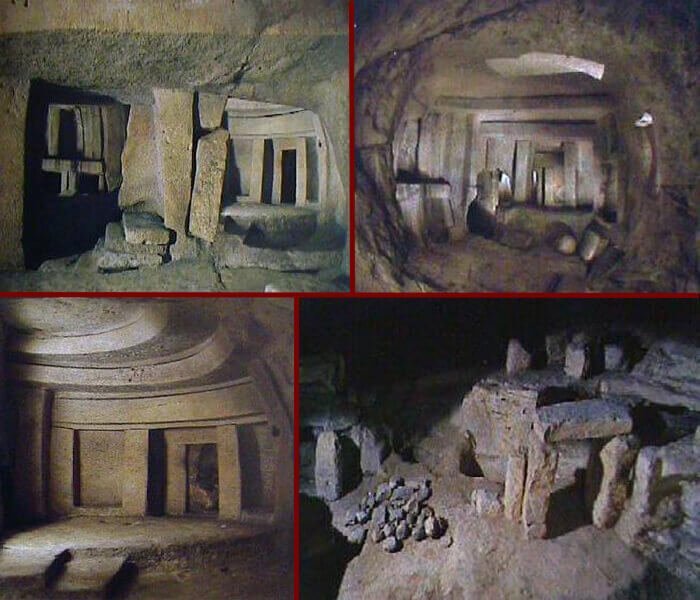 In the same room on the right side of the entrance wall sits a human hand carved into a stone. Next on the excavation report is a 2-meter pit with a purpose that can only be speculated: pit snake or alms collecting. Last, a special room called “The Holy of Hollies” containing three vertical stone structures known as trilithons, which were framed within each other.

No bones were found on the third floor or any signs of human remains, so it is believed the room was used to deposit grains, water and various sustenance items.

Among all these chambers, the Oracle Chamber imposes itself through its remarkable features: a perfectly acoustic enhancement design, with astonishing vocal resonance.

It is believed that its quality helped propagate and amplify the ritual chanting. The vibration produced inside this chamber created a unique effect in transposing the emotional spectrum, nowhere on this planet having been recorded such a reaction.

This is also the visually richest room in the entire site, with complex red ochre spirals ornate with circular blobs.

After a meticulous analysis, researchers established that 5,000 years ago the inhabitants of this place were a short race with elongated skulls, anomalies which are not present in our human ancestors, at least not those that we’ve learned of.

This intriguing fact points to a hypothesis which involves an extraterrestrial race that had once lived on the present territory of Malta, Paola.

For a short span of time, the skulls were displayed in the Archaeologic Museum of Valletta until mysteriously disappearing without a trace. The only evidence of this millennial discovery is represented by a few pictures which prove the bizarre find from Malta’s Hal-Saflieni is more than just a local legend or a fable

Whatever happened to the skulls we can only guess, but rumor has it the government tailed into the matter because of the extreme importance the skulls posed. Apparently, we are not allowed to learn our true history because of the contradicting truths we might find.