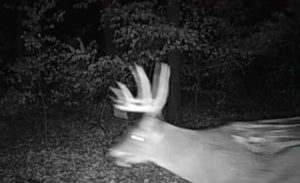 In a forest area, a trap camera captured something shocking and impossible. A deer with a wound that is incompatible with life appeared in the footage.

The damage extends over the entire back, the tissues are completely torn. Nevertheless, the animal walks calmly and does not seem to be in pain at all.

Warning: The video below is not recommended for the faint of heart, since the footage is really creepy.

Anyone, even those far from veterinary medicine, will say that the deer must be dead. It’s amazing how the creature didn’t die from blood loss. Moreover, it behaves as if nothing had happened.

It is important to note that there is no blood at all along the back where the flesh is removed to the bone. It looks like someone applied a special drug and only then began to remove a part of the body with a special tool.

Many stories of cattle mutilation can be found on the Internet, but all the animals died after mysterious procedures. The deer somehow survived. Cameras recorded him on October 17 and 18. Everything is fine with the animal, apart from the huge wound.

The footage was taken in Illinois in the US Midwest. Local hunter Chris Evans could hardly believe what he saw. Back in September, the male was intact, what happened to him is a mystery. Experts believe that the animal will not be able to walk for a long time with such damage: it will either be bitten by coyotes, or the deer will freeze in winter.