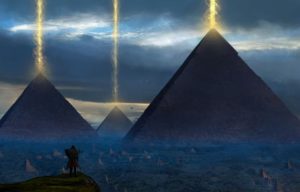 The Giza Pyramids are an amazing engineering feat and have long been believed to serve a purpose that is greater than being merely pharaonic tombs, reports gaia.com.

A group of physicists discovered that the Great Pyramid could concentrate electromagnetic energy, leading scientists to believe that they could use this ancient system to create new nanoparticles for sensor use and photovoltaic cells improvement.

A Russian and German scientist has found that the pyramids can interact with resonant-length electromagnetic waves. Scientists used numerical modeling and analytical methods to discover that radio waves can induce pyramid resonance at distances of between 200 and 600 meters.

How ancient Egyptians using stone tools could build such a monolithic structure aligned within 3/60th of a degree to the Earth’s cardinal directions, and encoded with the dimensions of the planet’s equatorial circumference, polar radius, and axial precession?

The recent study found that the pyramid can concentrate electromagnetic energy in its internal chambers and under its base, under resonance conditions.

This type of energy concentration in the chambers has been proposed by proponents of alternative archeological theories.

Researchers like Graham Hancock, Robert Bauval, and Christopher Dunn proposed the idea that the Ancient Egyptians, or a forgotten civilization that predates them, were far more advanced than we considered them.

Dunn says he believes the pyramids were built as an instrument designed to draw energy from the Earth’s ionosphere, much like the Wardenclyffe Tower planned by Nikola Tesla.