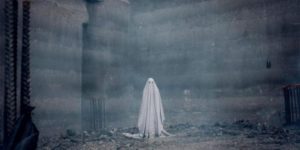 Why does a person “dress up” as a ghost by cutting eye-holes in a bed sheet and then draping that sheet over his or her head? Does a traditional ghost really wear sheets?

Well, people in the English-speaking world have been “doing” ghosts in just this way for hundreds of years, and there is a good reason for it. In Britain, until relatively recently, a wooden coffin was a post-mortem luxury that was far too expensive for many people.

In fact, only the relatively well-to-do could afford coffins in which to bury the remains of their departed loved ones. That meant that the corpses of poor people—and there were a lot of those—had to go coffinless.

So instead of boxing their dead, the poor shrouded bodies for burial by wrapping them in a winding sheet—a white cloth that bound and covered the corpse, head to toe.

And whenever a mischief-maker wanted to frighten someone by pretending to be a ghost, he used white fabric to give himself the appearance of a body that had just crawled from the grave.

According to Owen Davies, in his book, The Haunted: A Social History of Ghosts, winding sheets traditionally were made of linen, in imitation of Jesus’ burial shroud. But in 1666, in an effort to support the country’s textile industry, the British government ordered that they be made of wool.

For centuries, if you were British, dressing in sheets was an extremely effective way of scaring people.

Not only did most British people believe in ghosts—in fact, a slight majority still do—but one highly popular myth concerning the form in which a dead person might return in order to haunt the living was that of the revenant—a reanimated corpse that had clawed its way out of the ground.

Of course, one of these “walking dead” would doubtlessly be trailing its winding sheet as it staggered about the earth.

Although burial shrouds have been out of fashion for so long that we barely remember them, the archetype of the ghost as a supernatural being draped in sheets has remained with us, unchanged.