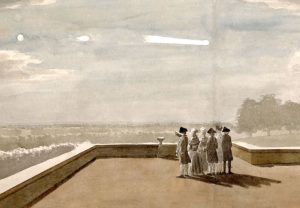 In the modern world, fake UFO photos and videos are common. However, centuries ago, the only means to capture something for memory was to draw it.

Therefore, many ufologists consider the early stories of UFO sightings to be more truthful than modern ones, because people then, in fact, had no reason to invent something for the sake of popularity and publications in the press.

The same can be attributed to the strange images of objects similar to UFOs or aliens that can be found on rocks and which are from several hundred to several thousand years old.

True, this article is not about such a deep antiquity, but about events that happened quite “recently”, at the end of the 18th century. This event had so many eyewitnesses, including members of the royal nobility, so it was eventually captured in an engraving.

On August 18, 1783, four people, standing on the terrace of Windsor Castle (royal castle) in the English county of Berkshire, saw something unusual in the sky at about 9:45 pm.

As it turned out later, the same phenomenon was seen by many people throughout the county. Among the inhabitants of Windsor Castle were seven eyewitnesses who later officially documented their observations: Thomas Sandby, founder of the Royal Academy, his brother Paul, Tiberius Cavallo, Dr. James Lind, Dr. Lockman, and two unknown women.

The engraving shown below was drawn by Thomas Sandby and his brother Paul, which depict exactly what they saw then. At first, people noticed flashes of light on the northern horizon, behind which a round, shiny object appeared flying across the sky.

Its size was about half the width of the moon. The object moved slowly at first, but then it accelerated and became brighter. 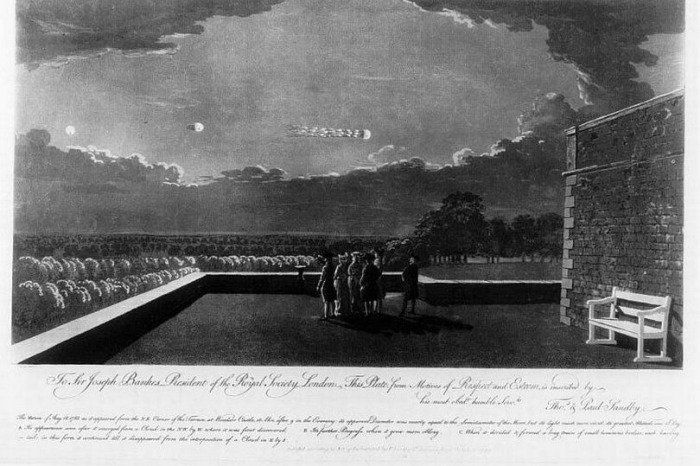 This observation was later recorded in the Philosophical Transactions of the Royal Society (1784):

“There was an oblong cloud moving more or less parallel to the horizon. Beneath this cloud a luminous object could be seen, which soon became rounded, brightly lit, and then stopped.

“This strange sphere at first appeared pale blue in color, but then its brightness increased, and soon it flew east again. The object then changed direction and moved parallel to the horizon before disappearing to the southeast.

“The light he gave off was amazing, he illuminated everything on earth for us. ”

Tiberius Cavallo described what he saw:

“It is evident that between 21:15 and 21:30 that night, a very bright meteor, entering the earth’s atmosphere over the open waters of the North Sea, passed along the entire east coast of northern Scotland and England.”

Of course, in 1783, no one had ever heard of UFOs, but the object they saw was clearly not a meteor, judging by the description that it stopped movement and then resumed it again. Meteors, of course, do not do that.

It was also reported that over the next ten minutes, many residents of the territories from the Shetland Islands to Brussels (!) saw how a luminous bright spherical object changed its shape into something ovoid and then repeatedly changed its shape, becoming again round, then ovoid.

A survey of some residents of England showed that it seemed to all of them that the object was flying at a very high speed, at least 20 miles per second, or even more.

It should be noted that in that era, not only Cavallo, but also many other educated people decided that it was just a rare type of meteor. At the same time, for some reason, they completely did not take into account such strange characteristics of the object as changes in speed, appearance, brightness and glow.

You can also find information that the passing meteor did not leave a crater behind and no one saw or heard how it exploded in the sky or fell to the ground.

But to just pause and think, if it was the first ever sighting of a UFO, no-one would’ve known about aliens in the first place, so it can’t be ruled out.