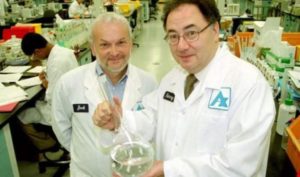 Some time ago, Donald Trump stated that coronavirus is susceptible to a drug like hydroxychloroquine. Until 2017, hydroxychloroquine’s largest producer was Barry Sherman, who, according to all friends and relatives, was professionally killed.

The billionaire and his wife, Hanni Sherman, were found hanged at their home. The bodies were discovered by brokers who visited the couple’s mansion in 2017. The police said that the killings could have been planned, the motive could be a robbery, but nothing disappeared from the mansion.

An autopsy showed nothing, so the authorities had to admit suicide.

Two years later, coronavirus appeared in the world, the medicine for the treatment of which was produced in large volumes by Barry Sherman company.

After the scandal, the investigation continued, private detectives joined. Together, they managed to find traces on the wrist of Barry and his wife. Most likely, they were tied with a plastic fastener, and then hung on belts.

According to experts, the killing, if any, was done very professionally.

From the whole story it becomes clear that someone already two years ago was preparing for the COVID-19 epidemic. The plans were either mass infection of people, or getting rid of competitors. The first option is more likely – bioterrorism.