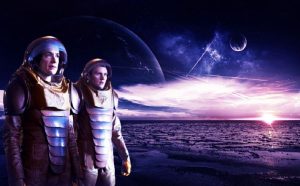 The idea of humanity evolving elsewhere in the universe and migrating to Earth, as well as various other corners of the galaxy may prove to be true after all.

Does this makes us the extraterrestrials of this planet? If so, where do we really come from?

Dr. Ellis Silver, a leading ecologist and environmentalist has gathered certain evidence pointing towards the hypothesis of humans originating from another place in the universe.

In his book “Humans are not from Earth: a scientific evaluation of the evidence,” he describes 17 ideas why humans are not from earth and also reveals information about the place of origin and an alternative human timeline.

An interesting aspect highlighted by Dr. Ellis Silver is the unique psychology of human beings which suggests that we were designed elsewhere in the cosmos, most likely on a planet with low gravity.

“Mankind is supposedly the most highly developed species on the planet, yet is surprisingly unsuited and ill-equipped for Earth’s environment: harmed by sunlight, a strong dislike for naturally occurring foods, ridiculously high rates of chronic disease, and more, “Dr. Silver told Yahoo news.

“The Earth approximately meets our needs as a species, but perhaps not as strongly as whoever brought us here initially thought. Lizards can sunbathe for as long as they like – and many of them do.”

Do we really come from another star system or planet?

“We are dazzled by the sun, which is also odd, most animals are not.”

Other facts from the book speak about how chronic illnesses which trouble the human race, such as bad backs, may prove that we developed on a world with low gravity. The doctor also considers the fact that humans have an extra 223 genes, according to a study published by Dr. Francis Crick.

According to a paper from bibliotecapleyades, ‘Collaborative research from a gathering of exo-scientists postulate that there are genes from over 20 extraterrestrial civilizations in human DNA.

These exo-scientists have continued the work of Nobel Prize winner Dr. Frances Crick, and other scholars in this area. Current findings are consistent with reports of Professor Sam Chang, who discreetly released information on his own apparent findings, in association with the Human Genome Project.’

Dr. Silver believes the human race has some peculiar traits which are clearly out of this world. According to him, the human body cannot find the perfect conditions to function flawless.

“We are all chronically ill,” says Dr. Silver. “Indeed, if you can find a single person who is 100% fit and healthy and not suffering from some (perhaps hidden or unstated) condition or disorder (there’s an extensive list in the book) I would be extremely surprised – I have not been able to find anyone.”

Other interesting ideas from the book

“I believe that many of our problems stem from the simple fact that our internal body clocks have evolved to expect a 25 hour day (this has been proven by sleep researchers), but the Earth’s day is only 24 hours. This is not a modern condition – the same factors can be traced all the way back through mankind’s history on Earth.”

At the opposite pole lies another theory of Doctor Silva, suggesting that if we didn’t reach the Earth in spaceships, then early humans could have been crossbred with another species, thus giving birth to ‘modern humans.’

The most probable star system from where humans could have arrived is Alpha Centaury, the closest system to our own.

“Mankind is supposedly the most highly developed species on the planet, yet is surprisingly unsuited and ill-equipped for Earth’s environment: harmed by sunlight, a strong dislike for naturally occurring (raw) foods, ridiculously high rates of chronic disease, and more.

“Plus there’s a prevailing feeling among many people that they don’t belong here or that something “just isn’t right.”

“This suggests (to me at least) that mankind may have evolved on a different planet, and we may have been brought here as a highly developed species.”

Another interesting idea from the book envisions the Earth as a prison planet, where a naturally violent species such as ours is condemned to live until it learns to behave.

However, Dr. Silver advises his readers to treat the topics discussed in the book lightly, because he embraces various probable realities, and there could be countless possibilities in the end.

“Humans are not from Earth” was published mainly to gauge reaction from readers and to provoke thought, particularly among those who might not have considered such a possibility before.”

The book is sure to raise some question marks. It offers an interesting perspective over things and encourages everybody to research on their own until eventually finding the truth. He also encourages readers to send all relevant opinions to further analyze them.