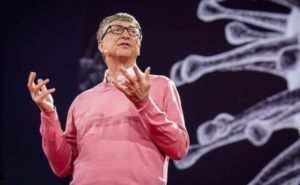 Bill Gates has repeatedly talked about how to deal with a pandemic and what it will lead to humanity.

His regular speeches made conspiracy theorists think that the entrepreneur was directly or indirectly involved in the outbreak of coronavirus.

According to analyst firm Zignal Labs, the theory that Bill Gates was somehow connected with a pandemic was mentioned 1.2 million times on social networks. Such messages on Facebook, for example, 16 thousand. Posts rated by 900 thousand people.

Another interesting fact is that the patent for the vaccine was received by a company funded by one of Bill Gates’s firms. Plus, the wife of entrepreneur Melinda in 2015 talked about a virus that would affect the whole world.

In his 2015 TED talk, Gates examined the ebola outbreak that killed thousands of people in Guinea, Liberia, and Sierra Leone. He highlighted the factors that kept the disease from spreading worldwide, and warned against the potential for a much more contagious, worldwide pandemic.

“The failure to prepare could allow the next epidemic to be dramatically more devastating than ebola,” he said. “You can have a virus where people feel well enough while they’re infectious that they get on a plane, or they go to a market.”

Indeed, that is exactly the case with the novel coronavirus — symptoms of the disease don’t necessarily manifest for up to 14 days, and potentially longer.

Analysts said the conspiracy theory came from one tweet published in late January. Proof of this is the PirbrightInstitute vaccine patent. Its funding was provided by the Gates Foundation. It is important to note that the vaccine was intended for poultry, not for humans.