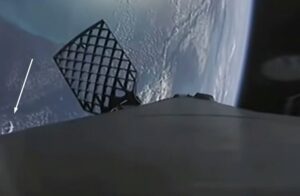 On January 24, Elon Musk’s SpaceX launched a Falcon launch vehicle with 143 satellites, the Transporter-1 mission. During the launch of the rocket into the calculated orbit, an unknown spacecraft flew near it at high speed.

The UFO appeared literally for a second on the camera showing the lower part of the upper stage. This happened long before the undocking of satellites, and in appearance this object does not look like satellites or a piece of space debris.

The object is quite large and very unusual in shape – in the center is a dark ball from which, like the legs of a spider, curved white projections extend, there are four of them and a thin bridge is visible between the two. The object resembles something alive.