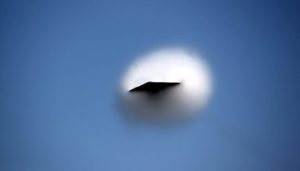 New drone footage shows a UFO fastwalker flying at a speed of 3,600 km/h through the sky over Saarland, South West-Germany, reports ufosightingshotspot.blogspot.com.

The small craft, captured on August 8, 2020, comes into view of the drone camera at a distance of at least 1 kilometer from the drone flying the 1 kilometer in just 1 second, that makes 3,600 km/h, as fast as a bullet.

“I saw the UFO while i was editing my drone footage at home. It´s super fast and flies with almost 4000 km/h. The government and the military know since tens of years that there are UFO´s and Aliens!”, author of the video wrote.

Like all other fastwalkers, the craft is very small and has no wings, tail or visible propulsion, and moves and/or changes directions at high speed far beyond what current aerospace technology is capable of, which makes it plausible that these objects are controlled remotely, whether by the military or of extraterrestrial.

What could be the reason that these objects flying through our sky, they are messengers or scouting probes?

Although we don’t know the secret of these fastwalkers yet, there are certainly people behind the scenes who undoubtedly know who is behind this highly advanced technology.