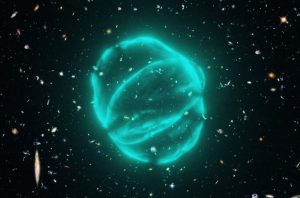 Like many astronomical anomalies, the name tells you pretty much everything you need to know about “weird radio circles”. These are round spots of radio emission that cannot be explained by known objects or phenomena.

They became known quite recently: the first such circle was discovered only in September 2019, and at the moment only five radio circles are known.

These ghost rings are difficult to study due to their weakness, rarity, and the fact that they do not appear in optical, infrared, or X-ray bands. Previously, astronomers could not even be sure if they were huge and distant, or if they were smaller and within our own galaxy.

More recent observations have helped determine their size and distance, finding that ORCs are about a million light-years wide, making them about 16 times larger than the Milky Way. Interestingly, they seem to be centered around galaxies with active supermassive black holes at their cores, which could provide clues to their origin.

In a new study, astronomers took a closer look at the very first ORC discovered using the MeerKAT radio telescope in South Africa to capture much more detailed images than ever before. The end results revealed a complex structure containing several inner circles and allowed the team to create radiation polarization and spectral index maps.

With all this new data, the researchers were able to come up with three main hypotheses about what could be creating the strange radio circles.

They may be the remnants of huge galaxy explosions at their center, possibly caused by the merger of two supermassive black holes. They may also be circular jets of energetic particles ejected from the center of the galaxy. Finally, it could be shock waves from star formation in the galaxy.

As with any mystery, collecting more data is the key to unraveling this cosmic mystery. Radio telescopes such as MeerKAT and ASKAP will continue to monitor discovered ORCs and look for new ones. A new phase of research will begin when the full Square Kilometer Array (SKA) radio telescope is launched around 2027.

Scientists have discovered why people die quickly after losing loved ones