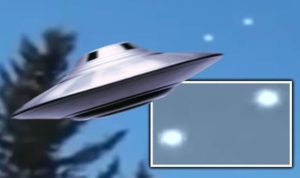 On June 5, 2020, two unidentified flying objects were spotted in the sky over Canada. Stunning shots taken by eyewitnesses, show first one UFO, which hovered at a relatively low altitude and which constantly appears or disappears from the field of view.

Ufologists believe that this is the result of the application of the invisibility system by this UFO, and with the slightest change in the direction of the camera on the object, it becomes invisible.

It is striking that both UFOs seem to do this on purpose, showing their technological superiority.

An eyewitness who was in a Walmart parking lot in Ontario, Canada recorded two objects and said that many people saw the strange appearance of UFOs in the sky, concluding that the flashing lights were in no way aircraft, helicopters or drones.

The camera is largely focused on the first UFO, but the second UFO can be seen in the video in the upper left corner of the screen (1.11 minutes in the video).